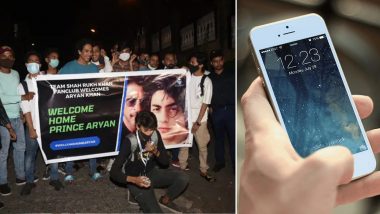 Aryan Khan's bail came as a happy news for all Shah Rukh Khan fans. The star kid who spent more than three weeks in police custody, was finally granted bail by the Mumbai High Court on October 28. Aryan was supposed to exit the Arthur Road jail on October 29, and a mob of fans gathered near the jail to greet the star kid. While everyone was excited to see Aryan, not many were aware that their phones were getting stolen at the scene. Shah Rukh Khan Fans Gather Outside Mannat With 'Welcome Home Aryan Khan' Poster.

As many as 10 mobile phones were stolen near the Arthur Road jail reportedly. However, senior Police inspector Pratap Bhosle contradicted the reports and said that he did not receive any complaints related to mobile thefts or phones going missing from that area. While Bhosle is stern on his verdict of the allegations, a Twitter user, who was present at the scene tweeted about his lost phone.

The Twitter sure named Jitendra Sharma wrote about how his phone was stolen when he went down to the Arthur Road jail to greet Aryan Khan. He said that if anyone has received any odd messages or calls from his number or social media accounts, it is because of the very reason.

Coming back to Aryan Khan, hoards of fans gathered outside Shah Rukh Khan's Mumbai residence Mannat, after his son Aryan was released from Arthur Road jail. There was a huge crowd outside Mannat and fans welcomed the star kid in a grand manner with dhols and bursting crackers. Aryan Khan Gets Bail: Karan Johar Shares Picture With SRK, Malaika Arora Visits Mannat, Suhana Khan Writes ‘I Love You’.

Due to the crowd of fans, SRK and Aryan initially found it tough to enter their home, however, after a few minutes, their car finally managed to make its way into Mannat.

(The above story first appeared on LatestLY on Oct 30, 2021 06:40 PM IST. For more news and updates on politics, world, sports, entertainment and lifestyle, log on to our website latestly.com).