Baaghi 3: Is Disha Patani's Song 'Do You Love Me' Copied From TroyBoi's 'Do You?' Diet Sabya Feels So!

The original track, "Do You" is directed and choreographed by Parris Goebel. ReQuest Dance Crew have been featured in this Taktix Films' video. 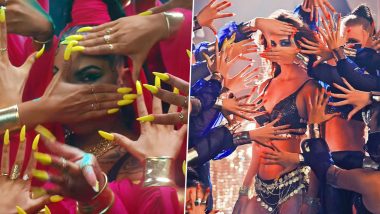 Tiger Shroff-Shraddha Kapoor starrer Baaghi 3 has grabbed headlines for its massy and meme-worthy content. The film is everything that a typical masala potboiler would have and hence, it is sure shot turning into an entertainer and the talk of the internet. However, Instagram account 'Diet Sabya', who is known to call out plagiarism has criticized the makers for copying content. The makers released the teaser video of "Do You Love Me" song featuring Disha Patani and it seems to be inspired by TroyBoi's "Do You." Baaghi 3 Trailer: Tiger Shroff's Ronnie Channels In His Inner Wonder Woman-Here's Proof!.

The original song and the Baaghi 3 tracks have a few similarities that cannot be overlooked. From Disha Patani's shimmery bikini look to the choreography, the scenes look quite inspired. In fact the music and the catchphrase 'do you love me' and its tune is similar. Moreover, the makers have not credited the original composers or the dance group.

Watch TroyBoi's 'Do You' Here:

And Watch Disha Patani's 'Do You Love Me' Here:

The original track, "Do You" is directed and choreographed by Parris Goebel. ReQuest Dance Crew have been featured in this Taktix Films' video. Baaghi 3 makers have credited singer Nikhita Gandhi, composer Tanishk Bagchi and choreographer Adil Shaikh. It is yet to be confirmed whether the makers have the rights to the song from which they have picked up cues for costume, choreography, make-up and even the lyrics.

Meanwhile, netizens are yet to get over the remake of Abhishek Bachchan's "Dus Bahane" (Dus) and Jeetendra's "Bhankas" songs. Apart from the memes, the fans are also wondering why the makers are hell-bent on rehashing songs instead of giving out fresh songs. Coming back to this particular song, do you think the track is copied or just inspired?

(The above story first appeared on LatestLY on Feb 26, 2020 04:46 PM IST. For more news and updates on politics, world, sports, entertainment and lifestyle, log on to our website latestly.com).