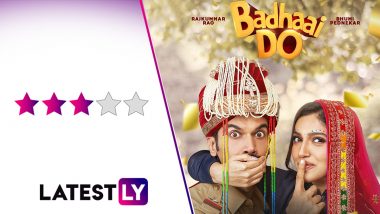 Badhaai Do Movie Review: There is an interesting aspect about the leads of Badhaai Do that I realised after watching the film. A couple of years back, Rajkummar Rao played a young hetero man who united a lesbian couple in Ek Ladki Ko Dekha Toh Aisa Laga. Then, Bhumi Pednekar had a cameo in Shubh Mangal Zyaada Savdhaan who once might have dated a gay man. Now these two get the chance to have their own closeted story in Harshavardhan Kulkarni's Badhaai Do where they show the difficulties of being a samalaingik in a town like Dehradun, where even a heterosexual couple gets punished for showing PDA in a park. Badhaai Do Song Bandi Tot: Rajkummar Rao, Bhumi Pednekar’s Cheerful Track Is Full of Sweet and Lovely Moments!

Rajkummar Rao is a cop Shardul Thakur and Bhumi Pednekar is a PT instructor Suman Singh, and both are closeted homosexuals. Telling their families about their sexual preferences is out of question for them, and when they are done being pestered into getting married for years, Shardul and Suman  decide to have a lavender marriage.

They decide to act like a  heterosexual married couple in front of their families, friends and colleagues, but they live like roommates and choose to pursue their own romantic lives. Of course, a little thought about how Indian families work might have told them this was a bad, bad idea. Because shaadi ke baad bachcha toh hona hi hai!

Bollywood cinema is an unusual place right now. At times we feel it has regressed and has gone back to the '80s and the '90s, with its obsession with South remakes and machoistic cinema. And then are the rare occasions when - here's where you need to thank the likes of Ayushmann Khurrana, Bhumi Pednekar and co - when Bollywood mainstream takes some efforts to go beyond usual conventions, an applaudable trait indeed. When it comes to alternate sexuality, it is heartening to see films like ELKDTAL, Shubh Mangal Zyaada Savdhaan, last December's Chandigarh Kare Aashiqui and now Badhaai Do explore the themes of LGBTQ.

I am not saying that all are good movies, and that they are doing complete justice to what they are trying to explore (like casting a cis actor as a trans person in CKA). In comparison with global cinema, these are still baby steps, but when it comes to our mainstream cinema, these baby steps feel like giant strides. At least these movies are attempting to bring the conversations out of the closet, even if they have to rely on conventionality to do so.

So that's one point in favour of Badhaai Do. I really liked the first half of the movie, when it establishes why Suman and Shardul go for the fake arrangement. The wedding may be rushed through, but in a country, where even intecaste romance is looked down upon - forget intercaste, even plain romance is seen as something not clean - I can understand why they choose to go for a lavender marriage. The film puts a little emphasis more on Shardul's situation, of his plight being a 'homocop' as he puts in, in what is seen as a very testosterone driven job. Also liked how Badhaai Do caresses through the romance between Suman and the new love of her life, Chenakki, played effervescently by Chum Darang. In between, it also manages to find time to address the inherent MCP-ness of male nature, no matter what kind of marriage arrangement. Anupamaa’s Rupali Ganguly Grooves to Badhaai Do’s Hook Step With Brother Vijay Ganguly (Watch Viral Video).

But then, Badhaai Do also has to make itself feel like it is a continuation of Badhaai Ho. And here's where the film falters. Just like with Suman and Shardul, the families also interfere enough in the movie's pacing itself. The extended family drama with the colourful but one-dimensional characters they bring in feels repetitive, because we have all seen all this in the past small town movies, from Shubh Mangal Saavdhan to Lukka Chuppi. This comes much of a problem in the second half, especially with the humour that feels forced in the proceedings, unlike how it felt in the first half.

It makes Badhaai Do very much predictable because we by then know what would be the happy conclusion be, and that's what it becomes. But here's where credit has to be given to the director. I had liked Harshavardhan Kulkarni's breakout movie Hunterrr, a coming of age story about a sex addict that was bold and yet delightful enough. Kulkarni also brings in his lead actor from Hunterrr, Gulshan Devaiah for a very loveable cameo in Badhaai Do.

The director, however, takes a -how can I put it rightly - 'safe' approach when it comes to Badhaai Do, especially with its portayal of LGBTQ scenes, which may get blamed on casting hetero actors in the roles. Or maybe that notion is wrong, and the approach is used for the makers to present the film and its ideas to a larger audience that is still opening up to these facets. While that can be a tad disappointing for those expecting Badhaai Do to be bolder in nature, I felt Kulkarni really did a good job in the film's final act, when it really brought out the 'closet' to the streets in a very touching scene. The final scene may be cliched, but it is cliched with a heart, and sometimes heart is what matters, no matter where it points to.

Badhaai Do also benefits hugely from its two lead actors. Rajkummar Rao continues to prove what a beautiful performer he is, blending humour with tenderness, as he strips emotional layers off Shardul's sculpted physique to reveal a vulnerable and scared core. He is particularly fantastic in the hotel room scene, where he tells Suman why he became a cop, and also in the pre-climax scene with his family and later on the rooftop when he calls up Suman. Badhaai Do: Netizens Ask Why Makers Of Rajkummar Rao–Bhumi Pednekar Starrer Had To Show The Entire Film In The Trailer.

Bhumi Pednekar is one helluva of a confident performer, good in both the light-hearted scenes and the emotional ones. A little disappointing is that Shardul has bit more of an edge as a character compared to Suman when it comes to writing - we never get to see how she manages to win over her family, for example - but Bhumi's performance manages to smoothen out some of the gap. Among the plethora of actors who play their relatives, Sheeba Chaddha as Shardul's ditzy mother and Nitesh Pandey as Suman's father.

- Formulaic Tropes and Forced Humour in the Second Half

Badhaai Do doesn't break new grounds, and is quite safe in its approach when it comes to telling an LGBTQ story. Yet, the movie works in its own way because it gets the emotions right, continues the conversation in a feel-good manner and benefits from the endearing performances from Rao and Pednekar.

(The above story first appeared on LatestLY on Feb 11, 2022 02:57 PM IST. For more news and updates on politics, world, sports, entertainment and lifestyle, log on to our website latestly.com).