Coolie No. 1 Song Mummy Kassam OUT: Varun Dhawan Steals Hearts As He Flirts With Sara Ali Khan in This Energetic Track (Watch Video)

The song has a vibrant touch to it. Crooned by Udit Narayan, Ikka & Monali Thakur, the song sees Varun and Sara in an energetic avatar. Varun is busting some crazy moves and trying to impress Sara Ali Khan. 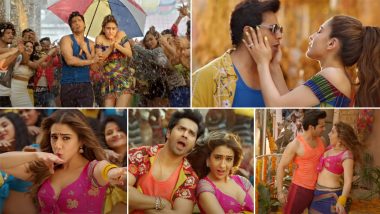 With only a few days left for Coolie No. 1's premiere on Amazon Prime Video, the team is making sure they keep the excitement level of the film super high. After releasing a hilarious trailer and two feet tapping numbers titled - "Teri Bhabhi" and "Husnn Hai Suhaana", the maker of Varun Dhawan and Sara Ali Khan starrer film have released a new peppy track titled "Mummy Kassam." Dhawan turns on his flirtatious mood for this song as he tries to woo Sara in the cheekiest way possible. Coolie No 1 Song Teri Bhabhi: Varun Dhawan's Energetic Moves Will Impress You.

The song has a vibrant touch to it. Crooned by Udit Narayan, Ikka & Monali Thakur, the song sees Varun and Sara in an energetic avatar. Varun is busting some really crazy moves and trying to impress the beautiful Sara Ali Khan. The peppy music has been given by Tanishk Bagchi and the chorus will surely get stuck in your mind the moment you hear this song the lyrics of which are penned by Shabbir Ahmed and Ikaa.

Sara looks stunning and is giving a tough competition to Varun when to shaking a led. The two have a sparkling chemistry and you can't help but notice it during the song. Apart from the dancing, the background also gives you a very cheery vibe. Adding a touch of Maharashtra, you see Varun in a tapori avatar while Sara is seen opting for fisherman dress for a portion of the song.

Coolie No. 1 will be the second film of Varun with his father after the box office success of Judwaa 2. The movie which is a remake of the 1995 Govinda and Karisma Kapoor starrer by the same name will see the fresh pairing of Varun and Sara. 'Coolie No. 1' will see Varun in place of Govinda from the classic and Sara in the place of Karisma Kapoor. Coolie No 1 Trailer: Varun Dhawan-Sara Ali Khan Recreate the Goofy Magic of Govinda and Karisma Kapoor Starrer in Their Own Style.

(The above story first appeared on LatestLY on Dec 15, 2020 07:02 PM IST. For more news and updates on politics, world, sports, entertainment and lifestyle, log on to our website latestly.com).