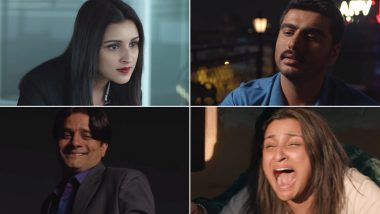 With films such as "Oye Lucky! Lucky Oye!", "Khosla Ka Ghosla", "Love Sex Aur Dhokha" and "Shanghai", which narrate the exceptional stories of average people, filmmaker Dibakar Banerjee has created a niche for himself in Bollywood. He says the simple common man was always around in our cinema, and the "macho" hero is basically a product of patriarchy. How does he see the average man being the hero of our films now, than the quintessential macho men? "I think the average man has always been there. The macho hero is basically a product of patriarchy and over the last five or six years we are seeing a very significant assault on patriarchy. Probably, that's why we are sort of seeing the kind of new heroes that we are seeing, and I am so glad that once the audience will see the climax of 'Sandeep Aur Pinky Faraar', they will have a new kind of hero," Banerjee told IANS. Coronavirus Outbreak: Sandeep Aur Pinky Faraar Starring Arjun Kapoor and Parineeti Chopra Gets Postponed.

Ever since his debut as a director in 2006 with "Khosla Ka Ghosla", Banerjee's films have always had a dash of realism. "Bollywood had enough degree of realism back in 2006 and it has enough degree of realism today, probably because of filmmakers like us in the early 2000's breaking our backs and trying to get new kind of content. A new generation of filmmakers got enthused by that, just the way we had got enthused by filmmakers like Ram Gopal Varma, Ketan Mehta and Shyam Benegal," he said. Dibakar says the new generation of directors are doing great work. Sandeep Aur Pinky Faraar Trailer: Parineeti Chopra Gets a Thumbs Up but the Trailer Receives Mixed Reactions from Twitterati

"Today there is a new generation of filmmakers doing very exciting work, and maybe in some small way our generations of filmmakers, who started about 10-15 years earlier, have something to do with it. I would like to be a party to this situation rather than just react to it. I think this is happening because of the films we made," he said. Earlier this year, the director returned to the digital space of filmmaking with "Ghost Stories". The episodic film comprised four standalone stories, directed by Zoya Akhtar, Anurag Kashyap and Karan Johar, apart from Dibakar. In 2018, the quartet had hit the OTT space co-directing "Lust Stories". Banerjee doesn't favour any particular medium -- OTT or the Big screen, as he says he wants it all.

"I'm a filmmaker. I am greedy. I want it all," he said. But Bannerjee is certain that he's not in favour of having censorship in any kind of platforms. "I don't think there should be censorship on platforms or in theatres. A society which can decide who it can persecute and who it cannot, is also adult enough to decide what to watch and what not on its own," he said. The director currently awaits the release of his next film, "Sandeep Aur Pinky Faraar", which has been pushed again, this time owing to the coronavirus pandemic.

(The above story first appeared on LatestLY on Apr 19, 2020 12:08 PM IST. For more news and updates on politics, world, sports, entertainment and lifestyle, log on to our website latestly.com).