Did Ankita Lokhande Show Her Support To Sushant Singh Rajput's Father For Filing FIR Against Rhea Chakraborty in Her Cryptic Post?

Sushant Singh Rajput's ex-girlfriend Ankita Lokhande posts a cryptic message on Instagram which makes us wonder if she is showing her support for Sushant's father who has filed an FIR against Rhea Chakroborty and many more. 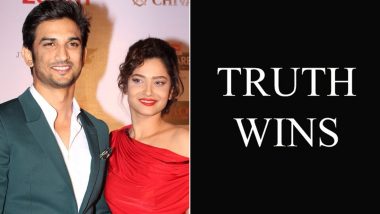 Ankita Lokhande has been posting a lot on her social media in relation to Sushant Singh Rajput, post his death. When 30 days had passed after his death, she posted a picture with 'Child Of God' as the caption. Today she posted a picture with 'Truth Wins' written on it. This comes close on the heels of Sushant Singh Rajput's father filing an FIR against Rhea Chakroborty. So do we take this as her support for his move? Although it's cryptic, it could be her way of putting her weight behind his fight. Huge Amount of Money Transferred into Rhea’s Account: Sushant Singh Rajput’s Cousin Neeraj

On Tuesday, Sushant's father K K Singh filed an FIR against Rhea in Rajiv Nagar Police Station along with six other people for abetment to suicide. An IANS report quotes Sanjay Kumar, IG Patna Central Zone saying, "Rhea Chakraborty and five other persons have been charged under Sections 340, 341, 380, 406, 420 and 306 of IPC after Sushant Singh Rajput's father filed an FIR against them. Further investigation is going on in the case."

Mumbai Police, on the other hand, had revealed that Sushant's father hadn't talked about the same when his statement was recorded. So we hope the truth actually wins and Sushant gets justice.

(The above story first appeared on LatestLY on Jul 29, 2020 01:41 PM IST. For more news and updates on politics, world, sports, entertainment and lifestyle, log on to our website latestly.com).