Anil Kapoor - Anurag Kashyap's AK vs AK To Release on Netflix: Did You the Know, the Project was Originally Planned with Shahid Kapoor as AK vs SK?

Anil Kapoor and Anurag Kashyap's next collaboration for Netflix was earlier planned with Shahid Kapoor but got shelved eventually. 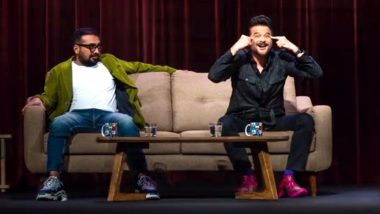 It was on the morning of July 16 that Netflix announced its promising list of 17 upcoming releases. It obviously included movies that ditched theatrical releases and also few of their originals for Indian audiences. While Janhvi Kapoor's Gunjan Saxena and Abhishek Bachchan's Ludo were among movies list, Anil Kapoor and Anurag Kashyap's AK vs AK was from their list of originals. But hey did you know the movie was earlier planned with Anurag and Shahid Kapoor and the title of which was AK vs SK? Netflix India Announces 17 Original Projects Including Janhvi Kapoor's 'The Kargil Girl', Sanjay Dutt's 'Torbaaz' And It's Time To Store Some Popcorn at Home! (Watch Video).

Apparently, the plot revolves around a film director whose big-budget movies fails at the box office. And seeing his recent failure, no one in the industry wants to work with him. With Shahid Kapoor, the plot was that Kashyap will kidnap his wife and ask him to sign his movie in return. Apparently, real-life wife, Mira Rajput was also on board to play Sasha's real wife. However, this collaboration never materialised and they later approached Anil Kapoor to replace Shahid.

However, when Anil Kapoor agreed to come on board, the makers had to make slight changes to their script. The wife in the picture was replaced by a kid and Anurag ends up kidnapping a child in his attempt to make Kapoor sign his upcoming release. Hence the caption on the actor's Instagram post reads, When @anuragkashyap10 decides to kidnap a kid for his next film, it’s time to show him ki baap baap hota hai! Ludo on Netflix: Rajkummar Rao Drops a Glimpse of His and Fatima Sana Shaikh's Tale from the Anurag Basu Anthology (View Pic).

When @anuragkashyap10 decides to kidnap a kid for his next film, it’s time to show him ki baap baap hota hai! #AKvsAK @motwayne Coming soon on @netflix_in

While the reason for Shahid's exit was never known, we are glad for Vikramaditya Motwane's much-stalled project is finally seeing the light of the day. Anil's kids, Sonam, Rhea and Harshvardhan Kapoor have a cameo in AK vs AK. "This journey, which starts on a fun and easy note, turns into a dark revenge film," said a source when asked to give some plot details.

Coming to its release date, the makers haven't confirmed the same. So stay tuned for the announcement may come in the next few days.

(The above story first appeared on LatestLY on Jul 16, 2020 11:33 AM IST. For more news and updates on politics, world, sports, entertainment and lifestyle, log on to our website latestly.com).