Exclusive! Sonam Kapoor Ahuja: I Was Scared To Work With My Father

Sonam Kapoor Ahuja was not particularly at ease when she entertained the idea of working with her father actor Anil Kapoor. 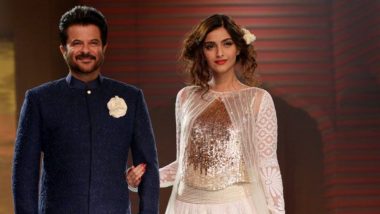 Sonam Kapoor Ahuja was not particularly at ease when she entertained the idea of working with her father actor Anil Kapoor. While signing on the dotted line for Ek Ladki Ko Dekha Toh Aisa Laga Sonam had many thoughts swimming in her head. LatestLY chatted exclusively with Sonam to know how did she exactly feel while sharing the screen space with Anil Kapoor, the actor. "I was scared of him. I was scared of the idea of working with him as well. One must operate as an actor no matter what but if you think it was a cakewalk to work in this film, and with him because he is my father...well you can't be farthest away from the truth," confessed Sonam.

Ek Ladki Ko Dekha Toh Aisa Laga is about a father-daughter relationship. The film also stars Juhi Chawla and Rajkumar Rao in the lead roles. Juhi is excited about working with Anil Kapoor after many years. Ask her what is the best part about working in this film and pat comes the response. "Watching Sonam and Anil Kapoor working together was an unbelievable experience. I have worked with Anil in many films but having Sonam on the sets was really an amazing experience. The chemistry they have both on as well as of the sets is fantastic." Ek Ladki Ko Dekha Toh Aisa Laga Trailer Date OUT! Anil Kapoor Shares a Sweet Picture With Sonam Kapoor.

Adding to that sentiment Sonam insists that she has seen her father working with Juhi on the sets of Deewana Mastana in Switzerland. " It was a fun unit in Switzerland. David Dhawan, Dad, Govinda and we were a bunch of kids there having a rollicking time. I have enjoyed the chemistry between my dad and Juhi ma'am. In fact, I love dad's chemistry with Madhuri ma'am and Sri ma'am (Dixit and Late Sridevi). So he is at ease with Juhi ma'am when it comes to acting for cameras but I am not. I was very nervous and scared," maintains Sonam.

Interestingly Anil Kapoor is celebrating his birthday today. So it's a double whammy for the evergreen actor. After blowing out 65 candles on his birthday cake Kapoor showcased his incredible enthusiasm and energy. " I feel young, motivated and Inspired every day. Every day is a fresh start. There's no time to waste you see," he said at the do.

(The above story first appeared on LatestLY on Dec 24, 2018 07:53 PM IST. For more news and updates on politics, world, sports, entertainment and lifestyle, log on to our website latestly.com).