Hrithik Roshan Is Ready to Say Goodbye to His Beard, Shares a Last Look on Social Media (View Pic)

"Before the beard goes," he wrote with the picture, in which he posed shirtless. The post delighted his fans, with many fans requesting him to not shave his beard. 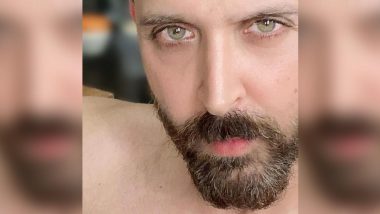 Actor Hrithik Roshan took to Instagram to share the last glimpse of his beard before shaving it off and sent his fans in a state of excitement. The actor shared a selfie featuring a tight close-up of his face. He looked straight into the camera in an intense manner, giving a glimpse of his grey and green eyes. Like Akshay Kumar, Will Hrithik Roshan Venture Into Digital Space?

"Before the beard goes," he wrote with the picture, in which he posed shirtless.

The post delighted his fans, with many fans requesting him to not shave his beard. AOne user commented, "Nooooa, while another wrote, "Your selfies are no less than a photoshoot."

Some were excited to see the transformation and complimented the actor on his good looks. One user wrote: "Closeup of the year."

"CONGRATS .....2nd MOST HANDSOME MAN IN THE WORLD," shared one user, while one wrote: "You're handsome both with & without a beard."

Hrithik, who made his debut as a hero with the hit film "Kaho Na... Pyaar Hai", completed 20 years in the industry in January this year. He was last seen on the big screen last year in Siddharth Anand's War. War: Was There a Hidden Gay Love Story in Tiger Shroff and Hrithik Roshan’s Action Thriller?

"The last 20 years, as an actor, have been a joy ride! Filled with learnings and diverse experiences. It has been enriching. I think I work because a working environment helps build virtues. And virtues is what one needs to become the best version of oneself. That in itself is my overall mission in life. Looking ahead, our industry is at a juncture where the audience, storytelling and technology are constantly evolving - there is so much out there to explore, to depict. It is an exciting space to be in, as an artist. I am excited for the next phase of my career," he told IANS in an interview earlier.

(The above story first appeared on LatestLY on Nov 29, 2020 07:36 PM IST. For more news and updates on politics, world, sports, entertainment and lifestyle, log on to our website latestly.com).