Priyanka Chopra has posted a picture with hubby Nick Jonas as they stepped foot on Indian soil. 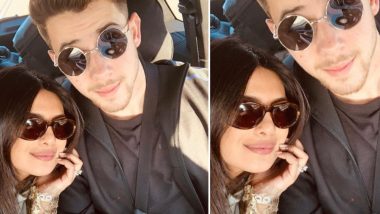 Priyanka Chopra has posted a picture on Instagram that would make her fans in India happy. The actress is back to the bay. Priyanka landed in Delhi earlier in the day with hubby Nick Jonas and was quite happy to announce her arrival on social media. She wrote, "hello Delhi.. so good to be back (sic)," But that is not all. PeeCee also called Nick her 'best travel buddy' in the same post. Isn't it romantic? Vanity Fair Oscars After Party: From Fixing Her Husband's Hair to Sticking Their Tongues Out, Priyanka Chopra and Nick Jonas' PDA Steals the Show - See Pics!

We are expecting to see more pictures of the beloved couple now that they are in India. Priyanka might be in Delhi to complete the shooting for her next Bollywood film, The Sky is Pink. More updates on that later. Nick Jonas' Ex Girlfriend Miley Cyrus is in Awe With Priyanka Chopra's Beauty! (View Pic).

Best travel buddy ever..hello Delhi.. so good to be back.. ❤️🇮🇳💋 @nickjonas

Priyanka and Nick got married in a lavish two-day wedding ceremony on December 14-15, last year. They tied the knot as per the Christian rituals followed by Hindu rituals.  “I love that our wedding was a religious mash-up,” Priyanka told People. “We took beautiful traditions that we both grew up with and personalized them in a way that made sense for us. It’s been incredible to find the commonalities between our beliefs and figuring out how to blend them in a respectful and meaningful way.”

Priyanka can be seen in the romantic comedy, Isn't It Romantic. The movie opened in theatres two weeks ago in the theatres in the US. It will debut on Netflix on February 28 in India. She will also be seen hosting the YouTube show, If I Could Tell You Just One Thing. She is also developing a movie on Maa Anand Sheela to star in. She is also in talks with Sanjay Leela Bhansali and Vishal Bhardwaj to star in their movies.

(The above story first appeared on LatestLY on Feb 27, 2019 09:41 AM IST. For more news and updates on politics, world, sports, entertainment and lifestyle, log on to our website latestly.com).

Comments
Tags:
Isnt It Romantic Nick Jonas Nickyanka Priyanka Chopra The Sky Is Pink
Comments
You might also like