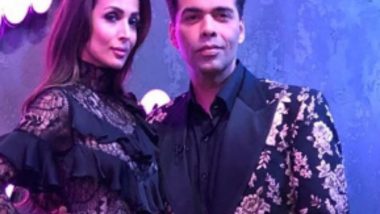 Malaika Arora, Karan Johar and Kirron Kher have brought back the Teletubbies word 'toodles' in fashion. The co-judges on the reality show 'India's Got Talent' make short, hilarious videos mocking each other. As usual, KJo plays the host just like he does in Koffee With Karan series. Last time when they made a video, he called Malaika a 'tacky version of Beyonce'. This time, it is a 'Taxi'. Malaika Arora Finally Removes 'Khan' from her Instagram Handle and Also Clarifies About the 'AM' Pendant.

So, the Chhaiyya Chhaiyya girl looked gorgeous in a yellow and black outfit. The filmmaker started off with appreciating her and then mocked her saying saying that she looks like a 'kaali-peeli taxi'. On which, a smart Malaika answered that the meter was running and shrugged him off saying toodles! Speaking of Kirron Kher, she was at her sarcastic best, taking all the chance to mock Karan Johar's unique dressing style. Of course, all of this was jest, in order to engulf the fans in some entertainment meanwhile.

On the other hand, we all know how B-town is painted in red with two grand weddings happening- DeepVeer and NickYanka obviously. Now, fans are also rooting for Malaika to get hitched to her rumored boyfriend Arjun Kapoor. The two have been hanging out together without any inhibitions and subtly accepting their relationship in public. So the media and their fans are curious to know, 'what next'?

(The above story first appeared on LatestLY on Dec 01, 2018 05:21 PM IST. For more news and updates on politics, world, sports, entertainment and lifestyle, log on to our website latestly.com).