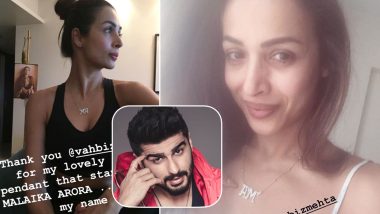 Malaika Arora shared a pic on social media yesterday where she was seen sporting a pendant with the initials- 'AM'. So it was kinda obviously for fans to decipher that she was hinting at 'Arjun - Malaika' considering how open they are currently about their love affair. However, some time later, the actress issued a clarification about the pendant saying how it was a mirror image and that it's actually 'MA' which stands for her name-  'Malaika Arora'. Sha shared a pic and said, "Thank you for my lovely 'MA' pendant which stands for Malaika Arora". Well, so all those of you who had been speculating about the initials, you've got your answer. Malaika Arora Wears an ‘AM’ Pendant and We Wonder If It Stands for Beau Arjun Kapoor or Son, Arhaan Khan.

Check out her pic below-

What we also noticed about her Instagram Handle is that Malaika has dropped 'Khan' from her name on Insta. Even though she and Arbaaz separated quite some time back, Malaika's Instagram Handle had 'Khan' written along with her name. But now with her and Arjun's relationship going strong and with the two of them coming out in open about their love affair, looks like the hottie is all set to become Mrs. Arjun Kapoor. Speaking of which, rumours of their wedding have been doing the rounds but from the looks of it, Arjun and Malaika are unlikely to tie the knot in 2019.

(The above story first appeared on LatestLY on Nov 30, 2018 10:03 AM IST. For more news and updates on politics, world, sports, entertainment and lifestyle, log on to our website latestly.com).