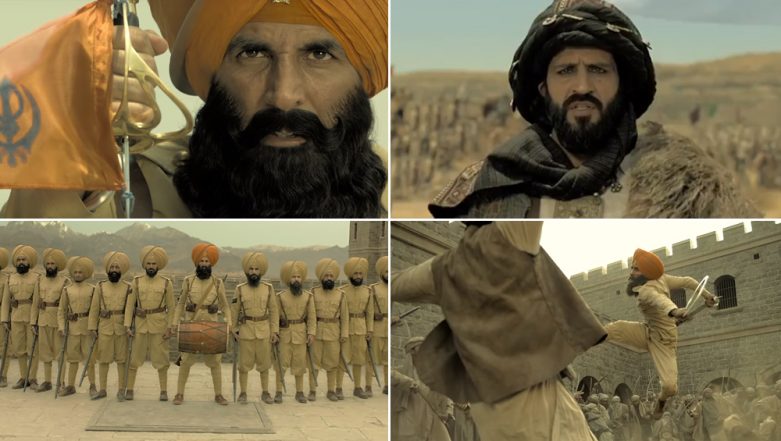 Akshay Kumar’s Kesari has been one of the most anticipated films of the year. Audiences have been intrigued by the movie ever since the first look was dropped. The film has garnered a huge appreciation from the film critics who have reviewed it prior to its release. The engaging and passionate storyline has amazed the reviewers and Akshay has once again managed to win hearts with his mesmerising performance. The movie marks a complete transformation of Akki to a very different role. Kesari Star Akshay Kumar Wants To See a Chapter on Battle of Saragarhi in History Textbooks.

The film has attracted positive reviews and gets a thumbs up from notable film critics. Film critic Taran Adarsh, has in his tweet, described Kesari to be outstanding. He wrote, “Chronicles a significant chapter from history brilliantly... Nationalism, patriotism, heroism, scale and soul - #Kesari has it all... Akshay’s career-best act... Anurag Singh’s direction terrific... Don’t miss! #KesariReview.” The film has received 4 stars from Taran.

Have a look at some of the reactions from other film critics and audience:

#Kesari is all about honour, courage and valour told with conviction. Here’s to the gutsy team, @DharmaMovies #TeamKesari Go for colour Kesari, this Holi. Winner, at heart and ticket counters. Congrats #AnuragSingh @karanjohar @apoorvamehta18 @SunirKheterpal @amarbutala

Congrats to Team #Kesari, what an awe inspiring movie... 21 Sikhs, who believed in secular India, and fought together to protect her sanctity. Thank you for this masterpiece!

Based on the 1897 Battle of Saragarhi, Kesari narrates the story where 21 Sikh soldiers of the British-India regiment fought against the 10000-strong Afghani invaders and wrote the heroic history with their sacrifices. Directed by the popular Punjabi filmmaker Anurag Singh, the movie stars Parineeti Chopra in the female lead. Kesari Stars Akshay Kumar and Parineeti Chopra Attend The Kapil Sharma Show With CRPF Jawans - View Pics!.

Kesari is slated to hit the theatres on March 21, the second day of Holi. The movie will be clashing with Vasan Bala's much-appreciated Abhimanyu Dassani and Radhika Madan starrer Mard Ko Dard Nahi Hota.