Akshay Kumar and Parineeti Chopra attend The Kapil Sharma Show with India's bravehearts, CRPF jawans and their families for a fun episode. 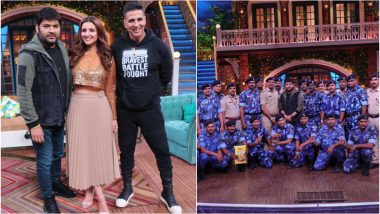 Actors Akshay Kumar and Parineeti Chopra are currently busy promoting their upcoming film Kesari. The duo recently appeared on The Kapil Sharma Show together and it was a special evening considering the show was graced by CRPF Jawans as well. The episode is expected to be fun given that the Army officials will also get a chance to showcase their talents on the show. A few pictures from the show were shared by Kapil Sharma on his Twitter handle and it looked like the actors had a great time with the men in uniform.

Sharing the happy moment of hosting the bravehearts and their families on his show, Kapil wrote, "Thank you @crpfindia and your lovely families for gracing #TheKapilSharmaShow with your presence, catch them on your screens tonight." Akshay Kumar's Urges Youth to Watch 'Kesari' Inspired by Battle of Saragarhi.

Thank you @crpfindia and your lovely families for gracing #TheKapilSharmaShow with your presence, catch them on your screens tonight on @SonyTV in #tkss pic.twitter.com/pF8Bl81l1J

The episode will also have Akshay and Parineeti revealing what they fear and apart from that a few fun things about working together on Kesari. Talking about the film, Akshay had recently said at an event, "We all know about the film 300 where 300 men fought against 80,000 people. That is a fictitious story. But this is a real story. I want parents to show this film to their children.”Kesari New Dialogue Promo: Akshay Kumar Shows What Courage Looks Like - Watch Video.

The film, which is directed by Anurag Singh, is all set to hit theatres on March 21, giving fans a perfect Holi gift.

(The above story first appeared on LatestLY on Mar 16, 2019 08:53 PM IST. For more news and updates on politics, world, sports, entertainment and lifestyle, log on to our website latestly.com).