Laal Singh Chaddha is a remake of the Hollywood classic Forrest Gump that starred Tom Hanks in the lead. The Hindi remake features Aamir Khan in the lead. Pictures of the actor in his new avatar is doing rounds on social media and it is said, it is his look for Advait Chandan directorial. 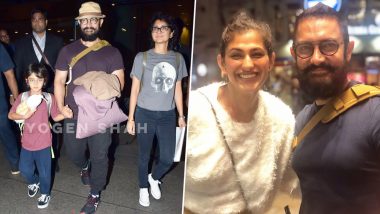 Aamir Khan, who is known as the perfectionist of Bollywood, never fears to take risks when it comes to do any roles. He has experimented with his looks even in his previous films. Be it to gain or lose weight, the actor does not hesitate to take up the challenge. Guess we’ll get to see a new avatar of Aamir Khan in his upcoming flick, Laal Singh Chaddha, which is a remake of the Hollywood classic Forrest Gump. Aamir Khan All Set to Undergo Body Transformation, Actor to Lose 20 Kilos for Laal Singh Chaddha.

On July 28 Sacred Games fame Kubbra Sait shared a picture of her fan-girl moment with Aamir Khan. From the picture it is clear that she couldn’t contain her excitement on meeting him. And now there’s another picture captured by the shutterbugs in which Aamir was spotted with his wife Kiran Rao and son Azad Rao Khan at the Mumbai Airport. In both these pictures, what caught everyone’s attention is his look. He was seen sporting a long beard, thick moustache, spiked hair and round-frame pair of glasses. Looks like the actor has started to work on his looks for Laal Singh Chaddha. CONFIRMED! Kareena Kapoor Khan Paired Opposite Aamir Khan in Laal Singh Chaddha.

Besides this look, Aamir Khan would also be shedding 20 kilos for the film. Like we told you before, he’ll go to any extent to get his character perfect for a film and the world is impressed seeing his efforts. Directed by Advait Chandan, Laal Singh Chaddha is slated to release in Christmas 2020.

(The above story first appeared on LatestLY on Jul 29, 2019 11:05 AM IST. For more news and updates on politics, world, sports, entertainment and lifestyle, log on to our website latestly.com).