Aamir Khan will next be seen in Lal Singh Chaddha, a remake of the Hollywood classic film, Forrest Gump. 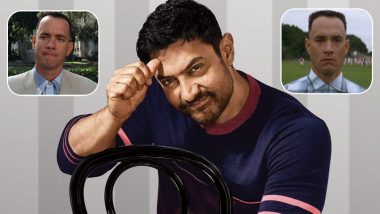 There is a reason why Aamir Khan is called as the Mr. Perfectionist of Bollywood. It is not just about the roles he takes up, but the efforts the actor takes to make his onscreen character look realistic, is what the fans of Indian cinema love about him. Aamir Khan has underwent body transformation to ace the roles he has picked in the past. Whether he had to go from fit to flab or the other way round, this 54-year-old actor has never shied when it comes to experimenting. Aamir recently confirmed about his next project, a remake of Tom Hanks’ film Forrest Gump. At an event, Aamir announced that he has to lose 20 kilos to portray the young version of Tom Hanks in this Hindi version, titled Lal Singh Chaddha. Aamir Khan Confirms His Role as Laal Singh Chadha in an Official Adaptation of Tom Hanks Starrer Forrest Gump, Watch Video.

Forrest Gump is the Hollywood classic film which released in 1994. In the Hindi version which will be directed by Advait Chandan, we’ll see Aamir Khan in a different avatar. Yesterday (March 27) at Dr. Nikhil Dhurandhar’s (a nutritional biochemist) book launch event which was held in Mumbai, Aamir said, “I play a young man in the movie, so I need to lose 20 kilos. I have already lost three-and-a-half kilos in two weeks under the guidance of Dr. Dhurandhar.” Even for Dangal, Aamir underwent transformation with Dr. Dhurandhar’s guidance. Lal Singh Chaddha: All You Need to Know Tom Hanks' Forrest Gump That Inspired Aamir Khan's Upcoming Film.

Lal Singh Chaddha is expected to go on floors by the end of this year and the makers are targeting for Diwali 2020 release. Details of the supporting cast is yet to be announced. This project is co-produced by Aamir Khan and Viacom 18. Stay tuned for further updates.

(The above story first appeared on LatestLY on Mar 28, 2019 01:33 PM IST. For more news and updates on politics, world, sports, entertainment and lifestyle, log on to our website latestly.com).