Lost: Aniruddha Roy Chowdhury Opens Up About His Upcoming Movie, Says ‘I Wanted To Highlight the Importance of Responsibility and Hope’ 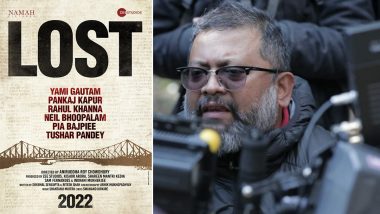 Director Aniruddha Roy Chowdhury, who is known for the Amitabh Bachchan and Taapsee Pannu starrer 'Pink' is coming up with another movie 'Lost' featuring actress Yami Gautam. While speaking about the inspiration behind taking the subject, the three-time National Award-winning director said, "There were many incidents that prompted me to work on the topic. One of them was when I witnessed a girl with an incredible passion and a great sense of responsibility towards her work. Lost: Yami Gautam, Pankaj Kapur, Rahul Khanna Roped In for Aniruddha Roy Chowdhury’s Next!

It got me thinking about how being responsible and committed has become a lost virtue. With 'Lost', I wanted to highlight the importance of it and also talk about hope. The film will make you question, introspect, and tug at your heartstrings." The ace storyteller, known for his filmography in Bengali, revealed that to him cinema is life, and that's what he likes to reflect on celluloid. Lost: Yami Gautam’s Investigative Drama Goes on Floor (View Post).

While talking about his interest in reality-based cinema, he said, "The way I have grown up, life in itself really attracts me, and that is what inspires me to tell a story. All my work in Hindi and Bengali has imitated realism. Both the audiences and critics or award juries have received them all well because people identify with reality." The movie also stars Pankaj Kapur, Rahul Khanna, Neil Bhoopalam, Pia Bajpiee and Tushar Pandey. 'Lost' is going to be released in 2022.

(The above story first appeared on LatestLY on Oct 11, 2021 05:53 PM IST. For more news and updates on politics, world, sports, entertainment and lifestyle, log on to our website latestly.com).