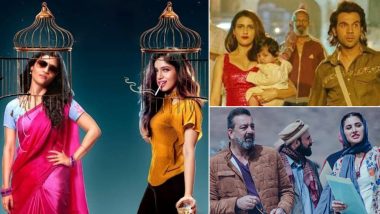 The Abhishek Bachchan-starrer "Ludo", "Torbaaz" starring Sanjay Dutt, "Dolly Kitty Aur Woh Chamakte Sitare" featuring Bhumi Pednekar, the Nawazuddin Siddiqui-starrer "Raat Akeli Hai" and director Mira Nair's "A Suitable Boy", featuring Ishaan Khatter and Tabu, are among the new stock of Bollywood films that have been confirmed for direct-to-OTT release in the coming months. These films are among a 17-strong lineup Netflix confirmed on Thursday, including six new films and two new series, which range from thrillers to romantic comedies to light-hearted dramas. #ComeOnNetflix: Kajol, Nawazuddin Siddiqui, Janhvi Kapoor and Others Drop Major Hints About their Upcoming Releases on OTT Platform; Big Announcement on July 16

The OTT platform has also previously announced "Gunjan Saxena: The Kargil Girl", starring Janhvi Kapoor and a dysfunctional family drama "Tribhanga" featuring Kajol, Tanvi Azmi and Mithila Palkar. The police drama "Class Of '83", featuring Bobby Deol and a dark comedy, "AK Vs AK", featuring Anil Kapoor and Anurag Kashyap, are also lined up. That apart, there are two series -- a young adult romance "Mismatched", starring Prajakta Koli and Rohit Saraf; besides "A Suitable Boy", based on Vikram Seth's critically acclaimed book, and to be available on the streaming platform globally except in the US and Canada.

"We know our members have unique tastes, moods and needs -- sometimes, they want to lean back and watch a delightful comedy and at other times, they want a pulse-pounding thriller that brings them to the edge of their seats. We are so proud to bring these diverse stories created by acclaimed and emerging storytellers and producing partners," said Monika Shergill of the streaming platform.

(The above story first appeared on LatestLY on Jul 16, 2020 05:41 PM IST. For more news and updates on politics, world, sports, entertainment and lifestyle, log on to our website latestly.com).