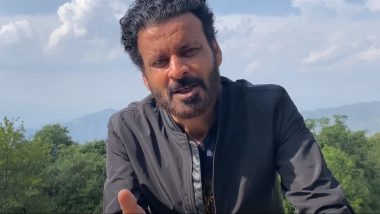 Bollywood celebrities are asked for their opinions on just about everything these days, National Award-winning actor Manoj Bajpayee notes. How is it possible to give a satisfactory answer on something he is not related to or well-versed about, he wonders. "If you say we are only actors, on Twitter you troll us by saying that (since) we are actors you want our opinions on things that we are not so good about. Bambai Main Ka Ba Song: Manoj Bajpayee and Anubhav Sinha Collaborate For a Bhojpuri Rap Which Is An Ode to Migrant Workers (Watch Video)

Yes, we are only actors and to talk about economy, to talk about something I don't have an idea or about the Indo-China border tension… How am I supposed to answer and satisfy your questions?" Manoj told IANS, deliberating on the subject of film celebrities having to tackle all sorts of questions these days, on media and social media. Manoj is back in the limelight rapping a number titled "Bambai main ka ba", which highlights the plight of migrant workers, and he would rather focus on answering questions about his song right now. Manav Gohil Wishes to Work with Manoj Bajpayee, Says ‘It Will Be a Dream Come True to Share the Screen with Him’

"So, calling for a byte and harassing actors is something you should not do. Let them (actors) be and let them do their job. Pull them up if they are doing anything illegal, pull them up if they are taking the citizens or the country for granted, or society for granted. Ask for an answers but don't ask them something that is not related to them," he said. But then, being an actor comes with baggage, isn't it? How does Manoj deal with it? "I am not so much concerned or care about glamour and fan following.

I concentrate on my job and I just go home. I do things with loads of freedom -- going to the grocery store or stopping at a vegetable vendor. I can do it because I really don't care," he said. "I am very much concerned with my growth as an actor and as a human being. Rest of the things don't affect me. I don't care about (other things). At times people tell me that, ‘Manoj, you have a million followers on Twitter, you should say thank you'. Friends let me know if I have reached one million or two million on Instagram, and (tell me) I should thank people. I do it," the actor added.

He said that it does not even occur to him that "these things are so much important." "If I am posting something I post it clearly because of professional reasons mostly, and some for very personal reasons. Otherwise, there is no mental or emotional compulsion to be on Instagram, Twitter or Facebook at all," Manoj summed up.

(The above story first appeared on LatestLY on Sep 20, 2020 12:29 PM IST. For more news and updates on politics, world, sports, entertainment and lifestyle, log on to our website latestly.com).