Nawazuddin Siddiqui Birthday: From Photograph To Kahaani, 5 Awesome Movies Of The Actor And Where To Watch Them

Nawazuddin Siddiqui turns 45 today. The talented actor has changed cinema for better and shown that we don't need a conventional 'Bollywood hero' to make a great film that will speak to the masses. Today, to celebrate his birthday, we are going to talk about some of the best movies that he has starred in. And, where you can watch those online. 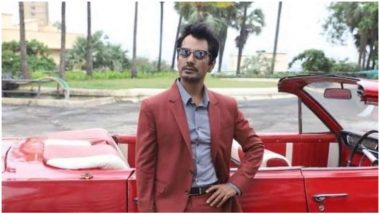 Nawazuddin Siddiqui is celebrating his 45th birthday. The incredibly talented actor has changed cinema for better. He has shown that we do not need a conventional 'Bollywood hero' to make a great film that will speak to the masses. Not many actors are there with the number of consistently awesome performances, like Nawazuddin. Today, to celebrate his birthday, we are going to talk about some of the best movies that he has starred in. And, where you can watch those online. Emmys 2019: Nawazuddin Siddiqui Takes Home The Trophy For McMafia While Lust Stories And Sacred Games Return Empty-Handed.

With the lockdown now extended to May 31, we all have a little more time on our hands to consume good entertainment. So, we are not including obviously popular performances like Gangs of Wasseypur. Because, any human being should have watched those 2 movies by default by now. The following are the movies featuring the actor that many have skipped. Nawazuddin Siddiqui: Don't Believe in Tags Like Star, Superstar or Megastar.

This movie was Vidya Balan's show. Agreed. But this movie is also the one that put Nawazuddin Siddiqui on the map. Most of his performances prior to this film had gone unnoticed. But here, his turn as an arrogant cop terrified the audience. We have not seen Nawaz in a role like this ever since.

In this underrated film, Nawaz plays the role of a man who paves a way through a mountain. Literally. It's not a metaphor. After the death of his wife, due to falling down the mountain, he decides to make a more accessible path to the nearest water source.

In this subtle, beautiful, romantic film, Nawazuddin stars opposite Sanya Malhotra. Their chemistry in the film is unlike anything we have seen in Bollywood. And we have never seen Nawaz's romantic side like this before, either.

In this film by Sriram Raghavan, Nawazuddin plays the yin to the yang. Slowly, the lines between his antagonistic character and the protagonist (Varun Dhawan) get blurred. By the end, we don't know who was the villain of this story. Nawaz's act was terrifyingly terrific. And, somehow, he managed to infuse humour into all this.

In this film directed by Nandita Das, the actor plays the role of author Sadat Hasan Manto. He won the Best Actor award at the Asia Pacific Screen Awards.

Nawazuddin will be next seen in the film, Ghoomketu. After being delayed for years, the movie is finally releasing online on Zee5. The shooting for his film, Bole Chudiyan, with Baahubali actress Tamannaah Bhatia, has also finished. The movie is in post-production stage and the editing of the same was finished under the lockdown.

(The above story first appeared on LatestLY on May 19, 2020 12:04 AM IST. For more news and updates on politics, world, sports, entertainment and lifestyle, log on to our website latestly.com).