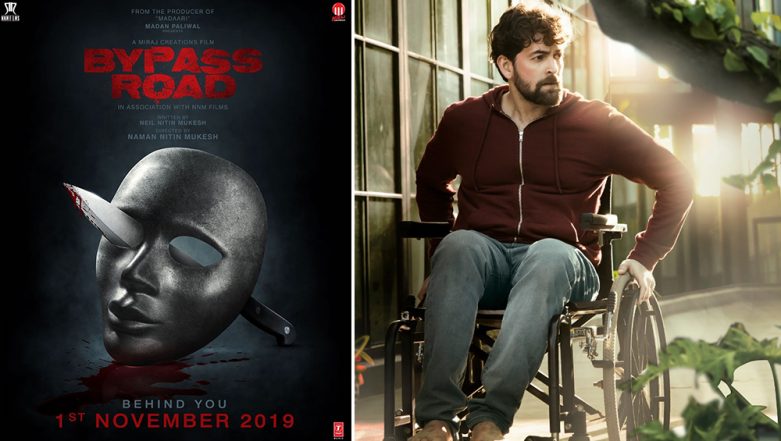 The directorial debut of Neil Nitin Mukesh’s brother Naman is set to reveal a lot of secrets with Bypass Road as they released the first look of their film today! The film is an action thriller who’s story revolves around a young man Vikram (Neil Nitin Mukesh) who is a fashion prodigy; but a major turn of events happens when he gets involved in a murder mystery.

A while back Neil Nitin Mukesh announced the wrap of Bypass Road and posted the first look from it on Instagram. Neil, who plays the lead in the film, is on a wheelchair and that made us want to know more about the movie. Just recently, the official announcement poster of Bypass Road was unveiled. Unlike all the other official announcements of films which usually happen in the morning, the team of Bypass Road took a different ‘route’ to reveal the first look and released it after the sunset. As all the mysteries and mishaps of the world start to happen after dusk, the idea behind launch was to fit this bill.

Talking about this first look from the movie, the poster has knife cutting through the eye of a mask and has blood splattered over it. That definitely gave us goosebumps and we just can’t wait to watch the trailer now!

This suspense thriller is Neil Nitin Mukesh's brother Naman's first film as a director and Neil himself serves as writer as well as the male lead. Adah Sharma co-stars opposite him and the film is produced by Madan Paliwal of Miraj Creations and co-produced by Neil Nitin Mukesh (NNM films). Bypass Road is slated to release on 1st November this year and it also stars, Gul Panag, Shama Sikander, Rajit Kapoor, Sudhanshu Pandey, Manish Chaudhary and Taher Shabbir in pivotal roles.