Priyanka Chopra's cousin, Meera Chopra who will be seen in Section 375 starring Richa Chadha and Akshaye Khanna, recently spoke about her cousin and brother-in-law Nick Jonas' relationship. Chopra had some sweet things to say about Nick and PC's romance. 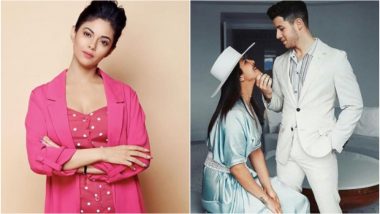 Meera Chopra who has been a popular name in the South industry is back with yet another Bollywood film , Section 375. The film has already won positive reviews and now the audiences are looking forward to catch the film considering its relevant topic. The courtroom drama stars Chopra in the role of Anjali Dangle, a rape survivor who fights for justice in the upcoming film. Considering the film releases on September 13, Meera has been busy with the promotions and during her recent interactions, was asked about her cousin Priyanka Chopra and Nick Jonas'whirlwind romance.

Priyanka Chopra and Nick Jonas took everyone by surprise with their decision to the tie the knot within merely six months of dating. The couple is social media's favourite eye-candy today and the paparazzi cannot get enough of the two. Meera Chopra Blasts Ahmedabad Hotel After Finding Maggots in Her Food, Calls For a Legal Action (Watch Video).

In an interview with ETimes, Chopra was asked about the current 'it' couple and she had a rather sweet thing to say. Speaking about how ideal her cousin PC and Nick's pairing is, she said, "Nick is completely in love with Priyanka. He's family-oriented and just a very sweet guy. I think Priyanka and Nick are completely in love with each other. They are giving relationship goals to the whole world."

Well, we have to say, we agree with Meera's statement about the couple giving relationship goals to everyone. Nick and Priyanka are highly supportive of each other's careers and their love dovey pictures are proof that the couple can't get enough of each other. Section 375 Movie Review: Akshaye Khanna Delivers a Powerful Act in This Murky Legal Thriller.

On the work front, Meera made her debut in the Bollywood with Gang Of Ghosts in 2014. After which she was seen in films like 1920 London which did not farewell. Her latest release, Section 375 though has been in the news for its contemporary topic. The film also stars Richa Chadha and Akshaye Khanna in lead roles. The film is currently running in theatres.

(The above story first appeared on LatestLY on Sep 13, 2019 04:32 PM IST. For more news and updates on politics, world, sports, entertainment and lifestyle, log on to our website latestly.com).