Priyanka Chopra and Nick Jonas were spotted in LA 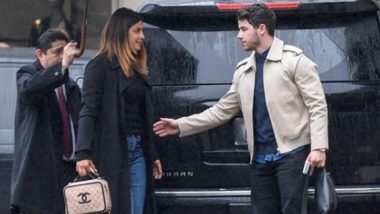 Priyanka Chopra and Nick Jonas have been having a busy schedule post their grand wedding. The couple was spotted in Los Angeles recently where Nick proved it yet again that he is a true gentleman. It so happened that Nick and Priyanka arrived at the desired destination in LA, and when PeeCee got out of the car, Nick gave her a helping hand. How sweet, isn't it? Now that's chivalry. The actress was seen wearing a black top and blue denims and teamed it up with a long, over- sized jacket. Nick was seen wearing a blue shirt with black jeans and a beige coloured jacket. We have seen very less of Priyanka Chopra in India ever since she got married. Post her wedding with Nick Jonas, she was in India for a couple of work commitments and after that she headed back to America. The actress also went on a short holiday with her beau to the Caribbean islands a few weeks back. Priyanka Chopra and Nick Jonas are Finally on Their Honeymoon, Take Off to the Caribbean for a Romantic Getaway - View Pics.

Priyanka and Nick today arriving at their hotel. #priyankachopra #nickjonas

As far her as Bollywood projects are concerned, Priyanka will be next seen in Shonali Bose's film, tentatively titled, The Sky is Pink. We last saw her in Bajirao Mastani way back in 2016! So, we're super excited to see her back on the big screen again. The movie also stars Zaira Wasim and Farhan Akhtar. She will also be seen in a supporting role in the Hollywood movie, Isn't it Romantic. The actress will also be seen hosting a chat show for YouTube red. Priyanka Chopra and Nick Jonas Cannot get Enough of Each Other, 'Mr & Mrs Jonas' Pose For a Perfect Picture!

Talking about Nick Jonas, Priyanka's husband has a few projects lined up in 2019 - Chaos Walking, UglyDolls and Midway. Clearly, both Nick and Priyanka have got too much on their plate for this year.

(The above story first appeared on LatestLY on Jan 18, 2019 02:59 PM IST. For more news and updates on politics, world, sports, entertainment and lifestyle, log on to our website latestly.com).