Radhika Madan Opens Up About Her Transition From Television to Films, Says ‘It Was Important To Shed the Ego That Comes With Television Stardom’

Radhika Madan has made a mark as a Bollywood actress with her roles in Angrezi Medium, Pataakha and Mard Ko Dard Nahi Hota. However, before her film debut in 2018, she was a well-known television star. She will soon be seen in the film Shiddat. Radhika will also be seen in two OTT original films 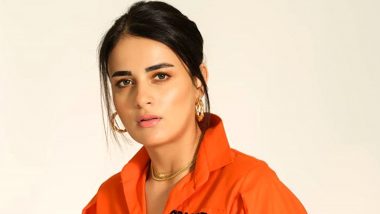 Actress Radhika Madan has made a mark as a Bollywood actress with her roles in Angrezi Medium, Pataakha and Mard Ko Dard Nahi Hota. However, before her film debut in 2018, she was a well-known television star. Talking about her transition from television to films, the actress said it was important to shed the ego that comes with television stardom. Radhika Madan Got a Star Kid Replaced from a Movie (Yes, You Read That Right).

"In television, fame comes really quickly, so you get the ego boost really quickly. Once the ego is high up there and you want to start with films, I don't think a lot of people are ready to bring their ego down and start as a student," she told IANS. Radhika Madan Says a Delightful Hello to Summer With a Bright Cover for Reverie Magazine!

Was it easy for her to leave her ego behind? "I wouldn't have survived otherwise. It's a different medium. The dialogues are different, the delivery scenes are different. Now you are sitting a dark room in front of a huge screen in front of you without distraction. Whereas in television, people watch it -- especially the saas-bahu sagas -- while taking care of their kids or cutting vegetable or doing household chores. The actors' performance needs to be up by a notch to get the attention but in movies even if you blink an eye, you miss the scene," she said.

For Radhika, who played the lead in television show Meri Aashiqui Tumse Hi between 2014 and 2016, taking the leap wasn't difficult because she was ready to evolve in accordance to her new medium. "It (change of medium) was not difficult in my head. I understood both the mediums and I think people see you as you see yourself. Because it wasn't a hindrance in my head, I don't think people saw it as hindrance as well. I was aware that television is a different medium and movies are different and I needed to change my acting style. I needed to unlearn whatever I have learnt," said the actress.

Radhika, who will soon be seen in the film Shiddat, added: "The problem comes when you want to approach movies with the same attitude, with same acting style as TV and you expect them to take you. It is about understanding the medium. Unlearning happens with every project."

Radhika will also be seen in two OTT original films. She says that she is open to the probability of the web some day overpowering films. "Earlier, there used to be a certain taboo connected with OTT. If you are coming on digital platform then it was a step down. Now if you are digital star, then people are in awe and they also want to be one. A time may come when digital stars are bigger than films stars. I wouldn't be surprised," said Radhika.

(The above story first appeared on LatestLY on Mar 19, 2021 09:31 PM IST. For more news and updates on politics, world, sports, entertainment and lifestyle, log on to our website latestly.com).