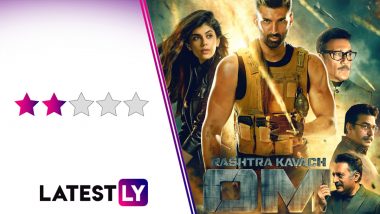 Rashtra Kavach Om Movie Review: Aditya Roy Kapur (aka Om) has rashtrabhakti coursing through his steely veins. Rakt (blood) can be sacrificed for Rashtra (country)-our hero reiterates the essence of his understanding of nationalism in a true Bollywood style. Watching his sculpted body and the bravado that go right alongside each other, you wait for the action to unfold, and for Kapur to unleash his saviour mode. Neither of it happens. All you get is an archaic and an outlandish tale stuck in the '90s. Kapur plays a secret RAW agent who loses his memory (only partially) during a skirmish in the first 20 minutes of the film. Will our saviour get his memory back? Will he save the country by being the ultimate Kavach (protector)- the nation wants to know, and Om delivers the answer surely, but quite wearily. So much so that you keep watching yourself yawning away through this slugfest. Rashtra Kavach OM Movie: Review, Cast, Plot, Trailer, Release Date – All You Need To Know About Aditya Roy Kapur, Sanjana Sanghi’s Film.

Director Kapil Verma sets the tone of what is supposed to be an action thriller with a gripping chase sequence. He then loses the steam and the much-needed grip over the subject steadily. Dev (Jackie Shroff) has created a 'scientific shield' to diffuse any nuclear attack on our Rashtra. The technology is a masterpiece in its own right (you have got to see how it works to believe its efficiency!) The introductory sequence of this tech-bravura is so badly designed that it is good (laughs!). Dev is targeted for his creative design - as there is a mole within the system who wants to get his laid on the much priced kavach. Dev disappears and Om must find him. In between this nonsensical narration, Om must find shelter under the steady gaze of Major (Ashutosh Rana), who loses his own son and ensures that Om poses as his own. Wifey Prachi Desai sheds tears in bucketful to get her adopted son Om's memory back. Maa ka pyar usko sab yaad deelayega - she howls.

Unfortunately, all Om remembers about his Maa is the home-cooked kheer ka swad, not an ounce or a minute beyond that. But that tragedy has no bearing on the overall EQ as Om must remain his 'strong-steely-kavach' self for the pride of the Rashtra and must get on with the job! A screaming head of the operation (Prakash Raj) wants to get a certain job done through Om, no matter what! Will Om make his Rashtra proud? Will he be able to trace Dev and restore the dignity he truly deserves for making the kavach for the rashtra? Rashtra, rakta and rashtrabhakti oozes out of every pore of the central character as they fight for a cause vaguely known to them. Aditya Roy Kapur to Romance Kriti Sanon in Sanjay Leela Bhansali's Next?

When not emoting intensely or spraying bullets, Rashtra Kavach Om is seen dealing with Ashutosh Rana who bulges his eyes at every sight of the enemy, Prakash Raj who turns his lungs upside down to howl every time he opens his mouth, Sanjana Sanghi (a fine decorative piece) and Prachi Desai (who ends up looking more like Om's sister than his mother). Much like the screentime, most actors are totally wasted.

With Rashtra Kavach Om, director Kapil Verma gives us a yawn fest in the name of an action thriller which is studded with caricatures. Kapur tries his best, but the lousy screenplay fails him oh-so-spectacularly. Action sequences are peppered smartly to hide the flaws the size of the lunar craters. but nothing seems to work except for Kapur's sincerity. The first 20 minutes and the chase sequence in the second half are the only saviour of this big skull-crushing bore.

(The above story first appeared on LatestLY on Jul 01, 2022 12:33 PM IST. For more news and updates on politics, world, sports, entertainment and lifestyle, log on to our website latestly.com).