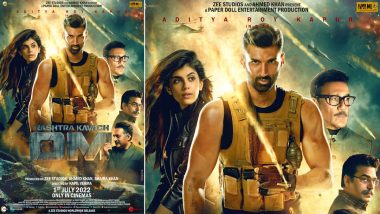 Rashtra Kavach OM starring Aditya Roy Kapur, Sanjana Sanghi in lead roles is all set to hit the big screens on July 1. Helmed by Kapil Verma, the action-thriller film is produced by Zee Studios, Ahmed Khan and Shaira Khan. The film is going to be high on actions with powerful acts by the lead cast members. The synopsis of the movie reads, "A battle within to keep the fighting spirit alive." OM - The Battle Within Trailer: Aditya Roy Kapur Is Seen As A Patriotic Warrior In This Action-Packed Flick Co-Starring Sanjana Sanghi, Prakash Raj And Jackie Shroff (Watch Video).

The movie unveils the story of Para commando officer, on a mission to save his country. The action-packed flick show how a patriotic warrior never stops when it comes to protecting his country.

Rashtra Kavach OM's movie tickets can be booked by BookMyShow or Paytm for any theatre or cinema hall near you. You can also check Amazon Pay for the movie's tickets. OM – The Battle Within Song Saansein Dene Aana: Aditya Roy Kapur And Sanjana Sanghi Share Sizzling Chemistry In This New Track (Watch Video).

Rashtra Kavach OM review is not out yet, as there's still time left for the film's release. LatestLY will update you all as soon as the review for this action-thriller is out.

(The above story first appeared on LatestLY on Jun 28, 2022 06:00 PM IST. For more news and updates on politics, world, sports, entertainment and lifestyle, log on to our website latestly.com).