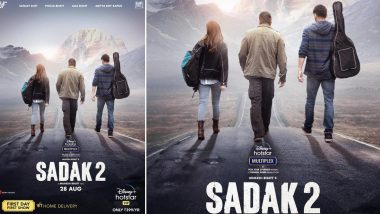 Here comes the official confirmation from the horse's mouth. Alia Bhatt, Sanjay Dutt, Aditya Roy Kapur's next, Sadak 2, finally has a release date. The film which was earlier announced for a digital release on Disney+ Hotstar will hit the OTT platform on August 28. Yes, that barely couple of weeks away. The announcement was made by Alia on her Instagram account and this would mark her first digital release since her debut in B-town. Directed by her father, Mahesh Bhatt, Sadak 2 also stars her sister, Pooja Bhatt. Sadak 2 Will Go For a Straight to OTT Release; 'This is the Only Option Left', Says Producer Mukesh Bhatt.

The movie is a sequel to 1991 release, Sadak, which starred Sanjay Dutt and Pooja Bhatt in the lead role. The team was earlier working on the film's post-production when coronavirus brought things to a complete standstill for a couple of months. Though it was earlier slated to release in theatres in October 2020, the makers decided to opt for digital way considering the situation of theatres and multiplexes in the country. The film was among Disney+'s major announcement that also includes names like Bhuj: The Pride of India, Laxmmi Bomb, The Big Bull, Lootcase, Khuda Haafiiz and Dil Bechara. Sadak 2: Alia Bhatt's Film in Legal Trouble; Accused of Hurting Hindu Sentiments With Movie's First Look Poster.

Check Out the New Poster

Considering the sequel was backed by Fox Star Studio, which later got merged with Disney, its digital release on Disney+ Hotstar came as no surprise. While there's no other major release scheduled on the same day, Janhvi Kapoor's Gunjan Saxena will hit Netflix on August 21, followed by Bobby Deol's Class of '83 on August 21.

(The above story first appeared on LatestLY on Aug 06, 2020 11:49 AM IST. For more news and updates on politics, world, sports, entertainment and lifestyle, log on to our website latestly.com).