Saif Ali Khan's Alien Based Go Goa Gone Sequel Gets Delayed Because of This Legal Battle Over 'Stree'?

Dinesh Vijan, Raj and DK gave a hit film, Stree, starring Rajkumar Rao and Shraddha Kapoor. The horror comedy was loved by the critics as well as masses. 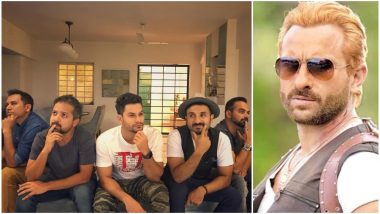 Saif Ali Khan starrer Go Goa Gone was a sleeper hit! The zombie comedy was a rage between the fans with the unique style of story-telling with actors like Vir Das, Kunal Kemmu, Anand Tiwari, Pooja Gupta in the lead. The Raj and DK film was obviously planning to have a sequel but now it is reported that the film has been delayed indefinitely! After zombies, Go Goa Gone 2: Babaji Ki Booty is going to be focused on their rendezvous with the aliens. Saif's Sacred Games 2 Teaser Will be Out in 14 Days? Netflix Hints So! (View Pic).

However, the film is right now on the hold because of a legal battle that is going on between the makers, Raj and DK and Dinesh Vijan. The trio recently gave a hit film, Stree, starring Rajkumar Rao and Shraddha Kapoor. The horror comedy was loved by the critics as well as masses, helping the movie makers mint hefty profit.

However, these three people are right now having a row over the profit sharing issue of this flick. "The producers had even locked Saif's dates but now, after the fallout between Dinesh Vijan and Raj and DK, the film is in limbo. The makers who had earlier collaborated on producing Stree (2018) were fighting a legal battle after there were disputes regarding profit sharing on the film. They are trying to sort the issue out so that work on the sequel can progress," DNA quotes a source.

While the fans will be disappointed after this news, there is still happy news at the bay. Saif's Sacred Games 2 is right around the corner which has left the fans in a state of excitement. The Netflix series is going to be larger than life this time and the audience cannot wait to see the first glimpse.

(The above story first appeared on LatestLY on Mar 23, 2019 11:22 AM IST. For more news and updates on politics, world, sports, entertainment and lifestyle, log on to our website latestly.com).