Rakesh Roshan's 1995 movie Karan Arjun is considered a cult in the Indian film circles. And why not, it starred that time's top actors Salman Khan and Shah Rukh Khan in the lead roles. 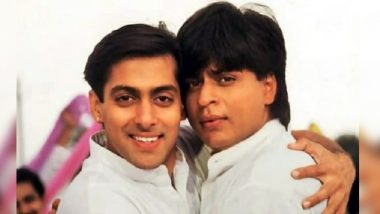 Rakesh Roshan's 1995 movie Karan Arjun is considered a cult in the Indian film circles. And why not, it starred that time's top actors Salman Khan and Shah Rukh Khan in the lead roles. However, did you know that creative differences had led to Shah Rukh Khan and the original choice Ajay Devgn walking out of the movie, followed by Salman Khan being cast and SRK almost losing the movie to Govinda. Well, all this was revealed by SRK himself in this throwback 90s interview himself. 25 Years of Karan Arjun: Salman Khan Calls His Movie With Shah Rukh Khan a Special Film with Beautiful Memories.

"Well, I wasn't too happy with the film to begin with. In fact, Ajay and I wanted to switch roles. When Rakeshji wouldn't agree, we both decided to drop out. Salman was taken on for Ajay's role. I went off to Delhi, I’d planned to return a couple of days before the mahurat to tell Rakeshji I wasn’t doing the film. Before that could happen, I learnt that my remark about not working with body- builders had been misinterpreted." Dus Ka Dum: Salman Khan and Shah Rukh Khan Recreate 'Karan Arjun' And Take Us Down That Sweet Memory Lane - Watch Video.

Check Out the SRK Interview Snippet Below:

"I've seen him (Salman) at concerts abroad. He whips up mass hysteria just standing on stage unbuttoning his shirt to the beat of Tap Tap Tapori. When he takes off his shirt there's a near-riot. It takes the crowd 5 mins to settle down again" - SRK#HappyBirthdaySalmanKhan pic.twitter.com/9aRpjXoDgM

He continued, "Salman thought I wasn't doing the film because of him... which just wasn't true. His family was very kind to me when I had first come to Bombay. How could I hurt Salman? I drove straight from the airport to the Holiday Inn gym where Rakeshji was working out. I told him I was doing the film. By then, they had already started negotiations with Govinda for my role but Rakeshji was good enough to take me back. So, there are no regrets." Well, we too have no regrets, after all, we got to cherish an epic movie, didn't we?

(The above story first appeared on LatestLY on Dec 27, 2020 04:34 PM IST. For more news and updates on politics, world, sports, entertainment and lifestyle, log on to our website latestly.com).