Salman will be seen playing the hero who leads a dual life, to seek adventure and thrill. But the daddy issues of the original have been kept intact. We are looking forward to this one 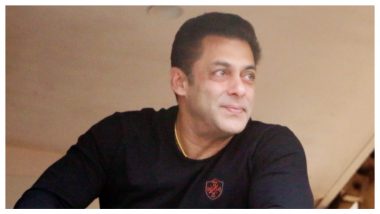 The fans are eagerly waiting for Salman Khan's this Eid's release, Radhe. He has also announced Kabhi Eid Kabhi Diwali. Salman is yet to announce which project will come after that. But the news might just be around the corner. As per a report by Mid-Day, Salman and his production house are working on a film series based on the mega-popular franchise Indiana Jones. But the film will not be a remake or an adaptation. Instead, makers are only using it as inspiration. A source told the daily, "Several characteristics will be changed. There is a conscious effort to not replicate any of Salman's trademark characters—Chulbul Pandey [Dabangg] or Tiger [Tiger Zinda Hai]," Salman Khan Gets Angry and Snatches Phone From a Fan At Airport (Watch Viral Video).

Salman will be seen playing the hero who leads a dual life, to seek adventure and thrill. But the daddy issues of the original have been kept intact. We are looking forward to this one. Salman Khan Gives a Nod to Rs 7.5 Crore Climax Scene in Radhe: Your Most Wanted Bhai (Deets Inside).

Salman Khan was also supposed to star in Sanjay Leela Bhansali's Inshallah with Alia Bhatt this year. But after the announcement, the film was shelved a few days into production. Sanjay and Alia, soon, announced a new project Gangubai Kathiawadi.

Quite a few remakes of Hollywood films are in production in Bollywood. Aamir Khan and Kareena Kapoor Khan are currently shooting for Laal Singh Chadha, which is a remake of Forrest Gump. Sushant Singh Rajput's Dil Bechara - a remake of Fault In Our Stars - might finally release this year.

(The above story first appeared on LatestLY on Feb 02, 2020 12:51 PM IST. For more news and updates on politics, world, sports, entertainment and lifestyle, log on to our website latestly.com).