Many of his Sanjay Dutt's admirers are commenting 'get well soon' on his new picture that was probably shared by one of the hospital staff members. 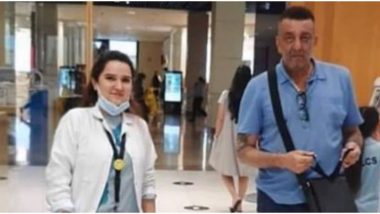 Sanjay Dutt is currently undergoing his treatment for what we believe is for cancer. The actor who flew to Dubai recently spent some much needed time with his kids before returning to Mumbai to resume his treatment. While his pictures with Maanayata Dutt and hospital visits frequent our Instagram feeds, this recent one has gotten all of worried. We assume it was clicked in a hospital where the actor is taking his treatment or probably visited for some other reason. Yuvraj Singh Wishes Sanjay Dutt a Speedy Recovery After Reports of Lung Cancer Diagnosis, Pens ‘Strong’ Note for the Actor! (See Post).

Sanjay Dutt looks visibly pale and weak in his new picture and his fans are worried for him. Many of his admirers are commenting 'get well soon' on his same picture that was probably shared by one of the hospital staff members. The actor has lost some weight and his frail look couldn't be ignored. There were reports that the actor has started taking his chemotherapy sessions for lung cancer but neither he nor his family members have confirmed any such development. Ranbir Kapoor and Alia Bhatt Pay a Visit to Sanjay Dutt Following His Lung Cancer Diagnosis (View Pics).

Check Out His Recent Picture

Here’s a glimpse of @duttsanjay who’s getting treated after being diagnosed with cancer. Hoping the actor recovers soon... #sanjaydutt #bollywood #cancer #cancerfree #cancersucks

Sanjay Dutt even announced his decision to take a break from his professional career. While he didn't mention any reason for it, the rumours of him getting diagnosed with cancer started doing rounds on the internet soon after. Maanayata Dutt flew back from Dubai to be by his side and is seen accompanying him for almost all of his hospital visits.

(The above story first appeared on LatestLY on Oct 04, 2020 02:51 PM IST. For more news and updates on politics, world, sports, entertainment and lifestyle, log on to our website latestly.com).