Sara Ali Khan and Ayushmann Khurrana to Team up for a Romantic Comedy?

Ayushmann Khurrana and Sara Ali Khan might be teaming up for a romantic comedy soon. The movie buffs for sure can use some fresh casting. Sara and Ayushmann's pairing will do the job. 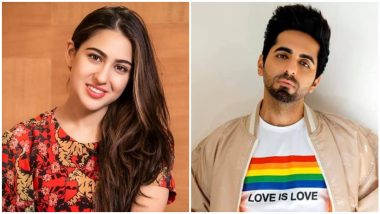 Ayushmann Khurrana and Sara Ali Khan might be teaming up for a romantic comedy soon. The movie buffs for sure can use some fresh casting. Sara and Ayushmann's pairing will do the job. The movie will be reportedly produced by Dinesh Vijan. Dinesh was at the helm of Ayushmann's film, Bala, last year. No plot details of the film have been revealed so far. But given Ayushmann's filmography, one can expect that it won't be a straightforward love story. There will be some exceptional masala. As per reports, the movie will go on floors in the first quarter of 2021. Alia Bhatt and Ayushmann Khurrana's Fresh Pairing Breaking Norms in This Ad Film Is Adorable Max (Watch Video).

As per a source that quoted to Mid-Day, "Considering it has Ayushmann leading from the front, the film — though belonging to the rom-com genre — may well drive an important message home. Sara has finished her promotions for Coolie No 1 and is expected to kick off the shoot of Atrangi Re soon. On the other hand, Ayushmann will follow up Chandigarh Kare Aashiqui with Anubhav Sinha’s next before training his sights on this movie. The project is in the last leg of the discussion." Yo or Hell No? Sara Ali Khan's Hot Pants and Baby Pink Shrug for Coolie No 1 Promotions.

Currently, Ayushmann is shooting Chandigarh Kare Aashiqui, where he stars alongside Vaani Kapoor. She reportedly plays the role of a transgender in the film. Sara will wrap up the shooting for Aanand L Rai's Atrangi Re, this year. Dhanush also stars in the movie, with a special appearance by Akshay Kumar.

(The above story first appeared on LatestLY on Nov 14, 2020 11:28 AM IST. For more news and updates on politics, world, sports, entertainment and lifestyle, log on to our website latestly.com).