Shabana Azmi Birthday: Did You Know The Legendary Actress Has Won Most Number Of National Film Awards In The Best Actress Category?

Shabana Azmi is a record holder in winning the most number of National Film Awards in the Best Actress Category. her work in the 80s were truly legendary. Even today, her movies can be a guide to every aspirant who wants to be known for the art of acting and not just the glamour. 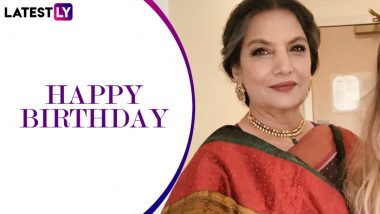 Shabana Azmi is one of the most talented and phenomenal actresses of India. Her works in the 80s in the parallel cinema stage is nothing short of legendary. Even when she was part of commercial cinema, she aced the role of coy girl with songs and dances pretty well. We often wondered how did Shabana Azmi agree to do such a role in films like Amar Akbar Anthony or Parvarish where she was just a hero's love interest. They always felt like a disservice done to her immense talent. Be it Mandi or Arth or Ankur or Masoom for that mother, everytime Azmi is on screen, you are assured of a tremendous performance. Guess that's why she is still the only actress who has the highest number of National Film Award wins. Shabana Azmi Birthday Special: 5 Social Causes Supported By The Actress That Prove She Strongly Believes In Giving Back To The Society

Shabana Azmi has won in the Best Actress category five times. It started with Ankur which was Shyam Benegal's debut movie, followed by Arth, Khandhar, Paar and Godmother. The latter released in 1999. Shabana Azmi Birthday Special: 7 Finest Performances From The Acclaimed Actress That Make Us Wish She Acts More Often

Even today, Shabana Azmi can hold a scene and the screen terrifically well.

(The above story first appeared on LatestLY on Sep 18, 2021 09:36 AM IST. For more news and updates on politics, world, sports, entertainment and lifestyle, log on to our website latestly.com).