Shakuntala Devi: Human Computer - Vidya Balan Continues Her Tryst with Red Saree on the First Look of the Biopic 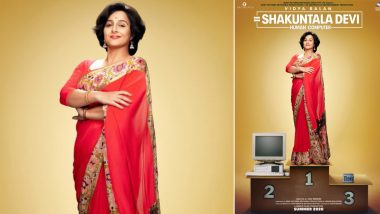 Vidya Balan has a knack for picking author-backed roles. The actress, after headlining the successful Mission Mangal, will now be seen playing the role of Shakuntala Devi, the popular Indian mathematician in a biopic. The first look of the actress in the role, sporting short hair, was leaked a month ago on the internet. Today, the official look along with the titled, Shakuntala Devi: Human Computer, has surfaced on the internet. Vidya can be seen donning a red saree and a wide smile. Beaming with positivity, she could be seen standing on a podium on the number 1 spot. On number 2 and number 3 spot, you can see a computer and a calculator, respectively. Clearly indicating that Shakuntala Devi's calculations were faster than the gadgets'. She was dubbed as 'human computer' and found a place in the Guinness Book of World Records.

Vidya and a red saree have had a long-standing relationship. She stole our hearts when she wore a red saree in The Dirty Picture. She also wore a red saree on her appearance on Koffee with Karan with Rani Mukerji. Not to forget her Cannes 2013 appearance. A simple Google search on Vidya and 'Red Saree' gives thousands of relevant results. But this time, her red saree has an empowering presence.

Vidya has begun shooting for Shakuntala Devi: Human Computer in London. She told PTI, "I am extremely excited to play the human-computer, Shakuntala Devi, on the big screen. She was truly someone who embraced her individuality, had a strong feminist voice and braved many a naysayer to reach the pinnacle of success.”

Check Out the Poster for the Film Here:

Shakuntala Devi: Human Computer will be directed by Anu Menon, who has made movies like London Paris New York and Waiting and also web-series Four More Shots Please. She says, “I’ve always been fascinated by Shakuntala Devi and truly felt that hers is an incredible story that had to be told. She was an extraordinary woman, who lived ahead of her time and on her own terms, unapologetically. From Vidya Balan to the rest of the cast and crew, and my producers, I’m so glad that all the elements have come together for us to put our best foot forward. I’m delighted that everyone will finally get to witness it on the big screen.”

(The above story first appeared on LatestLY on Sep 16, 2019 10:33 AM IST. For more news and updates on politics, world, sports, entertainment and lifestyle, log on to our website latestly.com).