Actor-producer Shreyas Talpade, who considers theatre his first love, has come up with the idea of an online theatre mandal where plays can be taken to the audience using the digital medium. 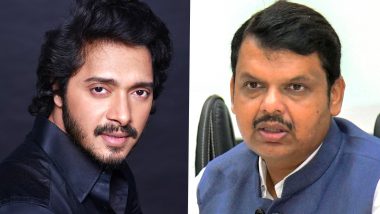 Actor-producer Shreyas Talpade, who considers theatre his first love, has come up with the idea of an online theatre mandal where plays can be taken to the audience using the digital medium. "The idea of an online theatre mandal came to me in the end of April when we were almost a month into the lockdown. All of us were thinking of what to do to survive," he told IANS. He wondered if theatres were going to be shut for a long time, then what would stage artistes and crew, who survive on daily wages, do? Union Minister Smriti Irani Lauds Sonu Sood For His Act of Kindness As He Continues to Help Migrant Workers Amid COVID-19 Crisis (View Tweet)

"I thought this could prove an opportunity, as the theatres are shut and no one is allowed to go in or come out, the theatre crew is limited to 15 or 20 people. We hire a theatre, clean it and follow all the protocols, hire a multi-camera set-up and go in. We shoot with the actors performing and do an online edit and then an offline edit to make the play crisper and once we have the final edit, we can project the play online as a normal show," he explained. Hum Tum Director Kunal Kohli Mourns the Loss Of Maternal Aunt to COVID-19, Shares an Emotional Post Saying, ‘Miss you Masi’.

Sharing an example, he said: "It's like how we have theatre shows, especially in Mumbai in the afternoon or in the evening. You have similar online shows for people who cannot go to a theatre. So if people can't go to theatres, we can take theatres to them." The Marathi theatre audience, he said, is aged around 40 on an average, though even youngsters watch plays. "But even after the theatres open, senior citizens will have reservations about going to theatres because of health and other issues.

They are used to watching plays at a particular time, so without disturbing that schedule we can give them their shows and favourite theatrical productions at their comfortable time. Whatever revenue and profits they earn can be shared with needy technicians," said Shreyas. In the first week of May there was a virtual meeting between certain members of Marathi film and theatre fraternity members with former chief minister Devendra Fadnavis and politician Vinod Tawde.

"That's where I mentioned it that this could be a source of generating some revenue. It's always better to have something than nothing," said the "Golmaal Again" actor. "Everyone including Fadnavisji loved the idea. All of us were of the same opinion to use technology to our advantage and take it forward. My role if you ask me, is to get producers, actors and people together and shoot for the play and look for a common platform which is known to everyone and put that play on the platform so that we can generate some revenue. So my role has increased a bit from the first time I mentioned the idea," said Shreyas.

But he points out that it's a collective responsibility to make sure to generate more and more revenue. He is also looking for some help from the Maharashtra government. "If the government can help us in making those theatres available especially state owned theatres where we can go and shoot, that would be beneficial for us," he said. Shreyas is a popular face in Marathi and Hindi cinema. So why theatre?

"It was not intentional as to why only theatre and not films. Obviously, we can think of an idea, a friend of mine, Sushant Shelar, has thought of a brilliant idea to shoot films as well. I thought of theatre probably because I come from theatre and theatre is my first love," he said. "The first thing, people that came to my mind are my theatre guys -- if theatre is going to be shut how are they going to survive? So, I thought why not have online theatre so that you can sit in the comforts of your home and enjoy it," he added.

(The above story first appeared on LatestLY on May 25, 2020 07:23 PM IST. For more news and updates on politics, world, sports, entertainment and lifestyle, log on to our website latestly.com).