Sonali Bendre Is Planning to Make a Comeback in Bollywood!

Sonali Bendre has worked in films and TV shows as well. Besides Bollywood, she has also worked in other regional industries as well. The last Hindi film in which Sonali was seen in was the 2003 flick Chori Chori. 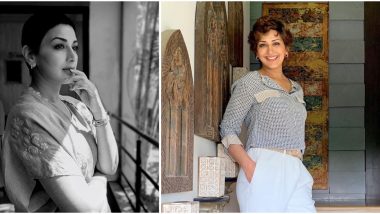 Sonali Bendre has worked in films and TV shows as well. Besides Bollywood, she has also worked in other regional industries. The last Hindi film in which Sonali was seen was the 2003 flick Chori Chori. And the last TV show in which she was featured was India’s Best Dramebaaz in which Sonali was the judge. She has been away from the screens since a long time. But looks like Sonali is all set to rock and roll all over again. In an interview to a leading daily, Sonali confirmed that she has plans to make a comeback in Bollywood.

It was in July 2018 that Sonali Bendre revealed on Twitter that she is suffering from cancer and undergoing treatment in a hospital at New York. In December 2018 she returned to bay post her treatment. From family to friends to fans, everyone were happy to know that Sonali Bendre has beaten cancer. The actress who has remained strong during the most difficult phase, definitely has no plans to not work. In an interview to BT she expressed on her plans to work in films in once again.

When Sonali Bendre was asked about making a comeback in Bollywood, she was quoted saying as, “Yes, definitely. Whatever comes my way, and if I like it, I will do it.” Sonali was also asked if ‘the illness altered her choice of scripts’ to which she further said, “Of course, it has. My decisions have changed because what is important to me now is to find joy in my work. I don’t want to do anything just because it pays well. I should like the people I am working with, should enjoy the role I am playing. Post the illness, there are a lot of factors which dictate my choice of work.” Well, B-town and fans would be extremely happy to see Sonali Bendre back on the big screens.

(The above story first appeared on LatestLY on Oct 09, 2019 08:45 AM IST. For more news and updates on politics, world, sports, entertainment and lifestyle, log on to our website latestly.com).