Rabia Khan, the mother of late Bollywood actor Jiah Khan, has said that she believes that her daughter, Sushant Singh Rajput, and his ex-manager Disha Salian fell victim to serial killing and asserted that people from Bollywood and politics were involved in the two deaths in June that she as dubbed murders Rabia, who herself has worked in a few Bollywood films in the 80s 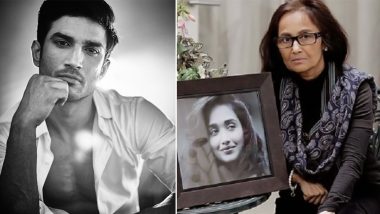 Rabia Khan, the mother of late Bollywood actor Jiah Khan, has said that she believes that her daughter, Sushant Singh Rajput, and his ex-manager Disha Salian fell victim to serial killing and asserted that people from Bollywood and politics were involved in the two deaths in June that she as dubbed murders Rabia, who herself has worked in a few Bollywood films in the 80s, said that from the similarities in all the three death cases, it could be easily made out that the same crime syndicate had given effect to these crimes. Sushant Singh Rajput Death Case: Kamya Punjabi Slams Rhea Chakraborty For Leaking Personal Chats About Fight With Sister (View Tweet)

She also drew parallels between the cases of Sushant Singh Rajput and her daughter to buttress her assertions. Jiah Nafisa Khan had allegedly committed suicide at her Juhu flat in June 3, 2013 at the age of 25. In an exclusive telephonic interview to IANS from London, Rabia said: "I have the feeling that whosoever killed Jiah has also used Rhea (Chakraborty) to kill Sushant." "The person who killed Jiah has killed Sushant. My child's boyfriend used her for her money. He controlled Jiah. Rhea was also doing the same. From where did she get this much money? If it came from Sushant, we know that (it is possible) since he was doing films, endorsements, and advertisements. If not, from where did all the money come from? Sushant Singh Rajput Case: Urvashi Rautela, Rashami Desai Join Shweta Singh Kirti’s Plea of Demanding a CBI Probe

Was she into drug trafficking? Was she into narcotics? Was she friends with drug peddlers?" asked Rabia, who was married to Indian-origin US businessman Ali Rizhvi Khan. She had worked in movies like 'Arrested', 'Karamyudh' (both 1985) and 'Locket' (1986). Rabia added: "Rhea is not as shrewd as she is projected to be. Whoever is conducting the whole affair (from behind the scenes) is responsible for the serial murders in view of the similarities in the Jiah and Sushant cases."

"The person who killed Jiah killed Sushant too," Rabia alleged. She asserted that her late daughter was 'brave' and that was the reason she was in Bollywood, pointing out that she had acted along with megastar Amitabh Bachchan (Nishabd) in 2007 and Aamir Khan in Gajni in 2008. "Who can act against such established names? Only someone who can communicate at an intellectual level. Not some illiterate or any Tom, Dick or Harry," she reasoned.

"Poor boy, Sushant, my daughter... really... they were simple, honest, spiritual, and innocent persons. That's why they got snared by vile people, the criminals. They did not have the brains of a criminal." Rabia again stressed the point that her daughter Jiah too was simple and honest. "Look, if someone is honest, he or she will easily be convinced by another person's claim of love. She was getting flowers for three months. Tiffins were sent to her. Both were going out. My daughter was spending the money. He was enjoying at her expense."

Rabia said that she had kept quiet for a long time, fighting her battle to get justice for Jiah. "But after witnessing Sushant's and Disha's cases, I had to come out - just as in case of Jiah, here too the angle of 'depression' is being touted. I am witnessing the same things which I saw in my daughter's case. That's why I had to step forward and speak on the whole issue," Jiah's mother said.

Asked if people from the Bollywood industry and politics could be involved in the alleged murders of Sushant and Disha Salian, Rabia shot back: "It is not 'could be' involved. They 'are'. They are fully involved. They have everyone in their pocket. They are involved in Disha Salian's case too. Disha was present at a party where all the row started. Sushant Singh said 'do not do to Disha what you did to Jiah'. From where all did these things come out? There can be no smoke without fire. Why are you going after the smokescreen created in the names of Karan Johar and the Chopra family? Why are you not chasing what is behind this smoke? The entire syndicate is now standing united to save the person who killed Sushant and Disha.

What are these people trying to hide? Who all will be exposed in the Sushant case? To save whom has the whole army of people jumped in to save? The whole universe you have created has become one to save Rhea Chakraborty. And there is someone behind Rhea who has weaved all this game." Levelling allegations against the Mumbai Police in Sushant case, she said it was bent on hiding the whole affair from the very beginning. "Had police dubbed the case as murder and done investigation on these lines, things would have been different. But police did not do so."

"First, they dubbed the death as suicide and then roped in a producer-director to give it a 'depression' twist and mislead the public by the smokescreen thus created. Two months were spent in all this. It is a drama, a strategy called 'how to get away with murder'."

(The above story first appeared on LatestLY on Aug 15, 2020 07:54 PM IST. For more news and updates on politics, world, sports, entertainment and lifestyle, log on to our website latestly.com).