Tadap is the remake of the Telugu film RX 100 and is directed by Milan Luthria. The movie stars Ahan Shetty and Tara Sutaria in the lead, while Saurabh Shukla, Kumud Mishra, Sumit Gulati and Rajesh Khera form the supporting cast. 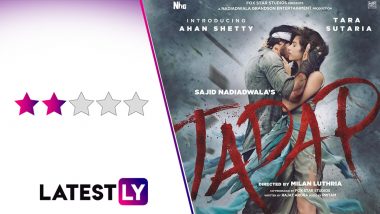 Tadap Movie Review: The end-credits of Tadap show that it is based on the tragic story of a real-life person. But that story itself that has been told and retold in our cinema for years. Imagine if the Kishan Kumar song "Achcha Sila Diya Tune Mere Pyaar Ka" got movie-fied. That in a way sums up Tadap in nutshell! It is a love story between a girl who seeks no inhibitions and a boy who refuses to differentiate between lust and love. The remake of the controversial Telugu hit RX 100, Tadap is directed by Milan Luthria and marks the acting debut of Ahan Shetty opposite SOTY2 debutante Tara Sutaria. Tadap: Athiya Shetty, KL Rahul Attend Together the Premiere for Ahan Shetty's Debut Movie.

Ahan is Ishana, a sturdy young man in Mussoorie who is the adopted son of the influential theatre-owner, Daddy (Saurabh Shukla). When we meet him first, he is very angry and alcoholic, beating up men and destroying properties of the local MLA Damodar (Kumud Mishra). After a couple of reels, we get to know why, as the story shifts back three years ago when Ishana, with lesser hair and lesser drinks in his belly, meets Ramisa (Tara Sutaria), the only daughter of Damodar who has returned from London.

It is physical attraction at first sight for Ramisa when she sees Ishana dancing, established by how her gaze travels from his face to errr... his crotch. Ishana is enamoured by the attention she showers upon him, and soon they get entangled in a passionate display of love. Even though it only lasts two days, Ishana is already heads-in-heels in love with her and wants to propose marriage to her. Before we could say 'oh, bhai, thand rakh!', Damodar finds out about them, and cut to present, Ishana is now a rage-fuelled Majnu on a destructive path, yearning to see a glimpse of his lover whom he has not set his eyes for in the past three years.

If you have watched RX 100, you would be knowing that it is an old-style love story, that changes course with a twist in the third act. It is problematic, pretty much toxic which is expected when the both the leads are absolutely flawed and suffers from pacing problems. The remake, Tadap, retains the essence of RX 100's toxic love story, but puts in a couple of interesting changes. The hero's RX 100 bike that gave the original its title is replaced here by what looks like a customised model of Bajaj V15, whose importance to the protagonist's personality is lost in the remake.

Another Bollywoodisation tactic is replacing the raw sensuality of the original film with a manicured romance in Tadap, where the lusty, deep kisses pave way for sanitised lip-locks. Pritam's love songs hammer hard the pain and the anguish of the troubled hero, while we are left with a sense of deja vu. Tadap is mostly a cumbersome watch, when we go through the same kind of motions of the kind of poor-boy-rich-girl love stories that we thought we left a couple of decades back.

The third act certainly changes things and brings a renewed level of interest in the proceedings, once that twist is dropped. Yet, the movie falters because the making refuses to not be kitschy, where characters speak in sonnets rather than normal lingo. When Ramisa hollers, "zamana badal gaya hai", I wished the makers would have listened to her there...

Alas! Say what you want about Kabir Singh's toxicity, at least the treatment made that movie a stunning watch. Here, more than how problematic both the lead characters are written especially Ramisa's, it is the dull execution that feels a bigger letdown. Even more annoying is the realisation the central conflict could have been lessened or avoided totally, if the characters in the film talked to each other properly instead of dropping faux philosophies about rubber bands. Salman Khan Thanks Fans For Supporting Team Antim; Actor Requests Everyone To Show The Same Love And Respect For Ahan Shetty’s Tadap.

Coming to the performances, debutante Ahan Shetty is intense and has a confident persona with a deep baritone. Where he falters is when the camera goes for a closeup and he has to deliver on the emotional turbulence on his countenance there. Still, given more room for improvement, he can go a long way. Tara Sutaria shows a marked improvement from her earlier performances in a role that is definitely not on her side. She is good in the scenes after the twist reveal. Saurabh Shukla and Kumud Mishra once against display their versatility and often steal the show from the younger actors. Sumit Gulati who plays the hero's friend is irritating.

- Not Everyone's Cup of Tea

(The above story first appeared on LatestLY on Dec 03, 2021 01:40 PM IST. For more news and updates on politics, world, sports, entertainment and lifestyle, log on to our website latestly.com).