In a recent interview, Saif Ali Khan made a comment on India's history in reference to his recent film, Tanhaji which has now invited trolls online. Read on! 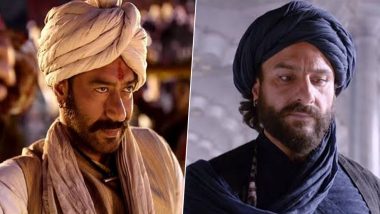 Ajay Devgn and Saif Ali Khan starrer Tanhaji: The Unsung Hero is roaring at the box office. But amid, this glorious news, in a recent interview with Anupama Chopra, a comment made by Saif has invited a lot of backlash for the star. Saif's comment targeting India's history has not gone down well with many. On Sunday, Saif reportedly expressed that he doesn't think there was an idea of India until the British came along. Based on the life of Tanaji Malusare, the movie highlights how the military leader took back the Kondhana fort from the Mughal empire.Tanhaji: The Unsung Warrior Box Office Collections Day 8: Ajay Devgn Starrer Keeps a Steady Pace, Earns Rs 128.97 Crores.

Khan's statement, when quizzed about his stance on the politics of the film was, "For some reason, I didn’t take a stand. Maybe next time I would. I was very excited to play the role because it’s a delicious role. But when people say this is history, I don’t think this is history. I am quite aware of what the history was. I don’t think there was a concept of India till perhaps the British gave it one. I don’t think there is really any constructive point in arguing about loudly, provided you yourself know why you’re doing it, he said. Well this is the reason, Saif became the target of the trolls and even his son Taimur was not spared. Check out a few reactions below. Tanhaji Movie Review: Ajay Devgn, Saif Ali Khan Own a Few Mass Moments in This Saffronised Masala Entertainer Packaged as a History Lesson.

According to Eminent Historian Saif Ali Khan, #Tanhaji wasn’t historically correct and there was no concept of India until British came.

This is what decades of leftist white-wash does

Know your Shivaji, know Chanakya and you would know how old India ispic.twitter.com/DJibAuw4zN

Taimur Was Also Not Spared!

Bollywood ‘history buff’ #SaifAliKhan claims “there was no concept of ‘India’ until the British came.”

Yes, #SaifAliKhan is right. The concept of India was forced by Britishers who rules us. It was earlier BharatVarsh, which has a great history associated with the Great Ashoka.

Some people just want to be politically correct, not historical correct. Shame!! pic.twitter.com/Irbs7h7YY2

East India Company was formed in 1600. What "India" were they referring to? The perils of publicly parading one's ignorance...

Saif Ali Khan is right in saying there was no concept of India before the British came.

Concept of Pakistan though is 1400 years old.

Columbus was looking for Pakistan and found America.

Then they changed history books.

Explaining why the Hindi film industry is making films such as Tanhaji, Saif accepted that ‘this is what runs’. “I would really like to a part of a film industry that would take a stand that wouldn’t make mass kind of films like that. Films that would rather say ‘hey this is what history is’ rather than mould it to certain kind of belief. But people say that is what runs and that’s what’s given it the extra kind of bump, I mean it’s more than just action movie. There’s an idea there that seems to have caught on, but certainly a dangerous idea.” What's your take on Saif's comment? Let us know in the comment section below. Stay tuned

(The above story first appeared on LatestLY on Jan 20, 2020 06:54 PM IST. For more news and updates on politics, world, sports, entertainment and lifestyle, log on to our website latestly.com).