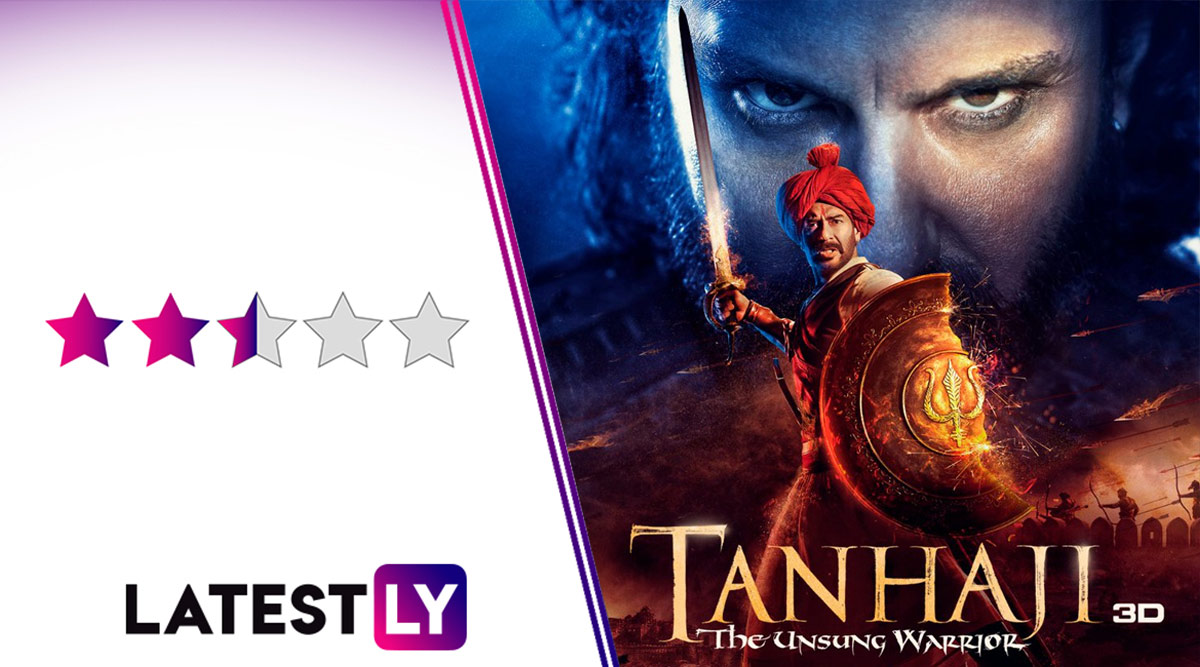 Tanhaji The Unsung Warrior Movie Review: If you remember the history that you learnt in school, and you should (unless you want to believe WhatsApp forwards), then you must have read about the great Chhatrapati Shivaji Maharaj. And you must have read about Tanhaji Malusare, his general, whose brave exploits in capturing Kondana fort is a lesson in valour. Director Om Raut and actor Ajay Devgn pay tribute to this hero with their film, Tanhaji: The Unsung Warrior. If you are someone who seeks the film for its inherent Hindu/Maratha pride, then Tanhaji is a treat for you. But if you look for a film defined by its substance, then you can enjoy its impressive action sequences and let it be. Tanhaji: The Unsung Warrior Actor Sharad Kelkar Considers Himself as a Very Greedy Actor, Here’s Why!

As a boy, Tanhaji sees his father die in action and takes the mantle of the warrior from him. As an adult, Tanhaji (Ajay Devgn) is Shivaji Maharaj's (Sharad Kelkar) favourite general, and an expert in guerilla warfare.

Shivaji Maharaj had lost the fort of Kondana to Mughal Emperor Aurangzeb (Luke Kenny) through deception and wants to claim it back. He is reluctant to give the assignment to Tanhaji, who is in the middle of his son's wedding preparations. Tanhaji, however, gets a whiff of what's happening and takes the charge of winning Kondana fort himself. He faces a formidable foe, though, in Udaybhan Rathod (Saif Ali Khan), the trusted and sadistic general of Aurangzeb who is sent to protect the fort. The rest of the film is Tanhaji devising ways to beat Udaybhan and seize the fort, while taking breaks in between, to offer praises of his king.

Let's talk about the positives of Tanhaji first. For a debut, director Om Raut has done a really good job, making a film that knows its audience well. He has mounted the film on an impressive scale, and his hold over the action sequences needs to be lauded.

The movie has a scintillating first act where it skilfully establishes Tanhaji's background and the Maratha-Mughal fracas. The first major fight sequence that follows, which gives us the first glimpse of Ajay Devgn as the eponymous hero, is extremely impressive and makes good use of the 3D gimmicky. The same goes for the Kondana battle sequence in the climax, which is exquisitely shot and features some very intense fight scenes.

The action choreography doesn't overdo the slo-mo shots, that's a sin in Indian cinema these days, using the technique where it makes the most impact. Like the scene where Tanhaji climbs a horse and gallops across the walls, taking down the enemies on the way. Or that very impressive shot of Tanhaji (and his horse) and Udaybhan leaping at each other. The violence shown in these scenes, especially Udaybhan's rough ways of killing, isn't for the kids, so a word of caution for the parents who want to take their tots to watch the film.

Also, a special mention to the art direction and the cinematography, both helping Tanhaji in getting a visual flair. The background score (that does uncannily reminds of Vikram Vedha's signature tune) adds a powerful tone throughout. The costume designs are also really good.

While the two major fight sequences are impressive, it's what comes in between where Tanhaji finds itself lacking. The drama, taking a page of Ajay Devgn's recent masala films, either goes for sappiness or be bombastic. Also, it lacks consistency when it comes to establishing the bond between the characters. Like, in the beginning, Tanhaji is very careful in how he behaves in front of his Maharaj. In a later scene, though, he behaves in a very impulsive manner with the king, almost chastising him, for not calling him for the mission.

Tanhaji also takes enough creative cinematic liberties with the story, which isn't a new thing for a biopic. But it takes a very beaten approach in narrating the tale, only impressing in spurts. The dialoguebaazi becomes repetitive, so does Saif's antics as the villain. More on him later.

And as is the flavour of the Bollywood cinema in New India, Tanhaji takes the path of making one particular community brighter than the sun (count the times, the characters utter the word 'bhagwa' or the times the colour is shown strewn throughout). While the other community takes a shade darker. The movie doesn't become a battle between two kings over a fort, which is what it should have been, but...ah, well, you get where I want to go.

This brings us to the antagonist, Udaybhan. Tanhaji makes its Hindu antagonist have a getup similar to how Bollywood portrays Islamic invaders. For a film that speaks of valour, it is hesitant to refer him as a Rajput, even muting the word when characters describe him as such. He is even seen celebratory-dancing to a song that says 'Vallah Vallah'. Ajay Devgn's Tanhaji: The Unsung Warrior Mutes The Word 'Rajput' Referring To Saif Ali Khan's Character Udaybhan Rathod.

And this will definitely go overlooked, right when the RW-ers are busy crying hoarse over how the religion of the acid attackers in this week's other release, Chhapaak, has been changed from Muslim to Hindu. That, btw, isn't true at all.

While Saif is game for hamming it up, his Udaybhan comes across as an orphan child of Alauddin Khilji from Padmaavat and any Amrish Puri villain character from the '80s. Gone is the nuance that made us love Saif's antagonistic portrayal in Omkara. Here, he is vile with nearly every scene featuring him hammering that, and making it contrast the flawless Tanhaji. The character is always dressed in black, just in case, you didn't get how bad he is. As if cutting the trunk of an elephant, shooting down an eagle, roasting a crocodile and kidnapping his widowed childhood love because he hated being friend-zoned weren't hints enough.

Watch The Trailer of Tanhaji below:

It isn't that the portrayal doesn't have its moments. There is a hilarious scene where, in his excitement over receiving a piece of good news, Udaybhan accidentally gets a few people hanged. But they are far and few, and mostly, we see Saif grunt and grin at the camera. And if you feel I am nitpicking here, maybe, you really aren't seeing where the winds are blowing.

Forgive me for another round of nitpicking. I know that child marriages were a norm back in those days, but was there really a need to make a song-and-dance routine out of it in this film? Could have just sailed through those portions without the pomp. The songs are pretty okay.

The role of Tanhaji feels right in the comfort zone of Ajay Devgn, who is nimble in the action sequences and breathes fire in his dialogues. The only thing is I have seen Ajay seen perform better in more challenging roles. The slight variations that I saw in his performance were in the softer scenes of Tanhaji with his wife Savitribai (Kajol). Speaking of Kajol, the actress may not have a role as long as the two leading men, but she packs a punch in the limited screentime.

Saif Ali Khan does look he is having a ball as his most one-dimensional villainous role. He brings the ferocity needed for the role and is impressive, particularly, in the final fight sequence. The problem I have has less to with his performance, and more with how the character is portrayed.

Sharad Kelkar looks and gives a very majestic performance as Shivaji Maharaj. Watch out for him in the scene where after being chastises by his general, his eyes well with tears. Fantastic act there!

- The Direction (for a Debutant in Bollywood)

- Slack of Pace in Between

- The Problematic Portrayal of The Antagonist

For his first Bollywood film, Om Raut makes a film that is engaging and a fare that would appease his target audience. As for the rest, it serves as a masala entertainer wrapped in a history lesson.