The Fabulous Lives of Bollywood Wives: Karan Johar Tagged As the ‘Favourite Wife’ on the Show; Filmmaker Reacts to Trolls

Karan found the troll pretty hilarious and shared it on his Twitter account. he thanked the troll who wrote this tweet and said that it was the funniest troll he had come across. 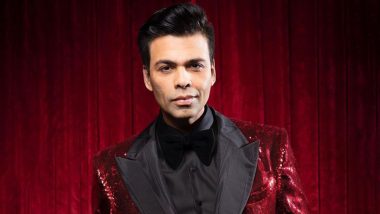 You might call it cringy, but let's admit that everyone is binge-watching Netflix's original series - The Fabulous Lives of Bollywood Wives. Revolving around the professional and personal lives of star wives - Maheep Kapoor, Bhavna Panday, Neelam Kothari and Seema Khan, the show is a mix of drama, laughter and glamour. Fabulous Lives of Bollywood Wives Review: Bhavna Panday and The Men Try To Redeem This Inane Excuse Of A Show.

Throughout the series, we get to see many guest appearance on the show as well including Arjun Kapoor, Janhvi Kapoor, Pragya Kapoor. Karan Johar, who has produced the show, too makes an appearance on one of the episodes of the show and had grabbed a lot of attention for it. People loved the gossipy side of the filmmaker to an extent where a troll called him the favourite wife on the show.

For anyone who has not seen the episode yet, KJo is seen indulging in an interesting gossip session with Maheep, Bhavna, Neelam and Seema which leads to a fight between Khan and Panday. Referring to the same incident, the troll wrote, "I think we can all agree that the favourite wife in #FabulousLivesofBollywoodWives is Karan Johar. #NetflixIndia,”

Karan found the troll pretty hilarious and shared it on his Twitter account. he thanked the troll who wrote this tweet and said that it was the funniest troll he had come across. Did Karan Johar Just Confirm That Sara Ali Khan and Janhvi Kapoor Were Dating These Brothers From the Same Family?

Ok this really made me laugh! 🤣

A troll with a sense of humour is so refreshing! Thanks Doc! https://t.co/nuelRifxzI

Karan's show - The Fabulous Lives of Bollywood Wives was recently involved in a controversy. Filmmaker Madhur Bhandarkar accused Karan Johar of lifting the title of the show from his title Bollywood Wives. Karan Johar soon issued an apology to him and changed the show’s name.

(The above story first appeared on LatestLY on Nov 30, 2020 01:53 PM IST. For more news and updates on politics, world, sports, entertainment and lifestyle, log on to our website latestly.com).