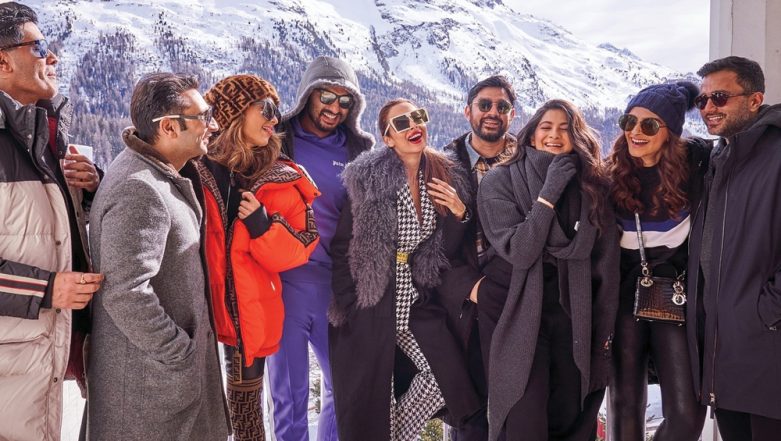 The blooming love story of Malaika Arora and Arjun Kapoor has painted the tinsel town red. Their mushy pictures and public display of affection are all over the internet. Fans cannot get enough of the two love birds and their official acceptance has turned many heads. The couple made many public appearances and does not shy away from talking about each other. Be it admitting their love on the celebrity talk show Koffee With Karan or walking hand-in-hand to a red carpet event, them much-in-love couple has been raising the bar of couple goals. Natasha Poonawalla recently shared a picture on social media, where Arjun and Malaika can be seen as happy as ever. Malaika Arora and Arjun Kapoor to Have a Church Wedding in Just Two Months?

The Ishqzaade actor was snapped with his beau Malaika Arora while heading to Switzerland together for Akash Ambani and Shloka Mehta’s pre-wedding party. Natasha took to her social media handle to wish Bollywood producer Rhea Kapoor for her birthday and shared a picture of them celebrating. In the photograph, many Bollywood couples including Arjun and Malaika, Sonam K Ahuja and Anand S Ahuja, Rhea Kapoor and Karan Boolani, posed together.

Rumour mills had earlier churned that Arjun’s cousin Sonam was not very fond of Malaika, but the gleeful picture has put all of them at bay.

On the work front, Arjun will soon be seen on the 70 mm screen with Raj Kumar Gupta’s India’s Most Wanted, releasing on May 24, 2019. The actor also has Sandeep Aur Pinky Faraar opposite Parineeti Chopra in his kitty. The Directed by Dibakar Banerjee and bankrolled by Yash Raj Films, the movie is slated to hit the theatres on June 14, 2019.