Varun Dhawan-John Abraham's Dishoom Sequel to Go on Floors in 2020? 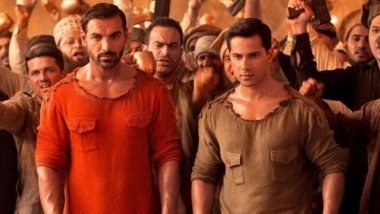 Varun Dhawan and John Abraham made for the best bromantic pair when they featured in the film, Dishoom. Directed by Varun’s brother, Rohit, this film also starring Jacqueline Fernandez was loved by the mass to the core. Now producer Sajid Nadiadwala and the filmmaker are all set to come up with the sequel of the film. The first instalment involved a plot that had a star cricketer getting kidnapped and then rescued by a handsome cop and his humorous junior. Now, it is yet not clear if John and Jacqueline will reprise their roles or not, but Varun will reprise his role as ‘Junaid.’ Attack! After Dishoom, John Abraham and Jacqueline Fernandez Reunite Once Again for This Action Film.

The source close to the development, “The film will be shot in India and abroad, and Rohit will go on a recce with his team early next year as he intends to take the film on the floors towards the second half of 2020.” The source also said, “He has been working on multiple ideas for his next directorial for a while now. One of them was a plot that had the potential of taking the buddy-cop franchise forward. He recently narrated the first draft to Varun and Sajid, both of whom have green-lit the project.”

Well, we can expect something cool from the franchise and see an out-and-out entertainer from them again! Meanwhile, the fans are also expecting Kick 2 from Nadiadwala. Which of the two instalments do you want first? It will be a tough between Salman Khan and Varun Dhawan!

(The above story first appeared on LatestLY on Dec 24, 2019 11:29 AM IST. For more news and updates on politics, world, sports, entertainment and lifestyle, log on to our website latestly.com).