Vikram Gokhale Passes Away: Did You Know Veteran Actor Had Played Lord Krishna in a Sanjeev Kumar Film?

Vikram Gokhale had also directed a Marathi movie Aaghaat that came out in 2010. His last film was Nikamma starring Abhimanyu Dassani and Shilpa Shetty Kundra. 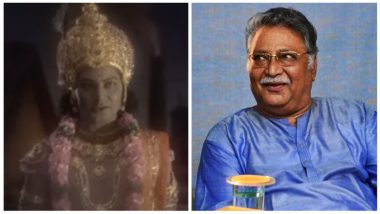 Vikram Gokhale, the veteran actor and theatre artiste who was quite popular in both Hindi and Marathi industry, is no more. The actor has not been feeling well for the past few days, and was admitted at Deenanath Mangeshkar hospital in Pune. Though a couple of days, a news went viral that he is no more, but his family refuted those rumours and there was a statement from the hospital that he is showing signs of improvement. Sadly, that was not to be, and this acting legend is no more with us. Vikram Gokhale Dies at 82; Veteran Actor of Marathi and Hindi Cinema Has Passed Away in Pune.

However, the movie we want to talk about here is Yehi Hai Zindagi that came out in 1977. Directed by the legendary Malayalam filmmaker the late KS Sethumadhavan, Yehi Hai Zindagi was the Hindi remake of the 1974 Tamil film Kaliyuga Kannan.

Yehi Hai Zindagi stars Sanjeev Kumar in the lead, along with actors like Utpal Dutt, Seema Deo and Ramesh Deo. Singer Lucky Ali had appeared in the film as a child artiste. The movie is about a poor man who is blessed by the visit of  Lord Krishna, when he steals money that his wife had kept aside for donation to the temple. The man complains to the Lord that the latter is always impartial to the rich, and therefore, Lord Krishna agrees to make him rich as well. While the Lord lives upto his word and the man does become rich and influential, the new wealth doesn't bring him happiness that he had earlier, which was Lord Krishna's way of teaching his bhakt that easy way to riches cannot give you the happiness that you have when you enjoy the fruits of your hard struggles. Veteran Marathi Actor Vikram Gokhale Passes Away at Pune Hospital; Last Rites to Take Place at Vaikunth Samshan Bhumi at 6 PM Today.

Vikram Gokhale had played the role of Sri Krishna in the film, and it was one of his early roles. You can watch a scene from the film below:

The movie is available to watch for full on Eros Now.  Although if you revisit the film now, it would come with a twinge of sadness as nearly the main cast of the film from Sanjeev Kumar, to Utpal Dutt to Ramesh Deo to now Vikram Gokhale is no longer with us. Rest in peace!

(The above story first appeared on LatestLY on Nov 26, 2022 04:00 PM IST. For more news and updates on politics, world, sports, entertainment and lifestyle, log on to our website latestly.com).