After Chris Pratt Gets Support From Robert Downey Jr And Mark Ruffalo Against Online Hate, Fans Troll Them For Not Taking Stand For Brie Larson

Robert Downey Jr and Mark Ruffalo along with others are receiving flak for not standing up for Brie Larson. 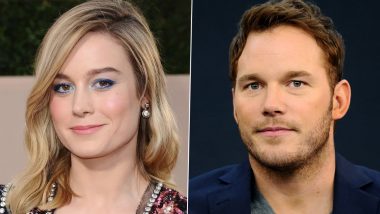 Chris Pratt has been trending for a while when a filmmaker asked on the internet, 'Who is the worst Chris in Hollywood?' The actor from the Marvel movie franchise received hate online which was called out by Robert Downey Jr, Mark Ruffalo, James Gunn. However, now, the fans are questioning these stars as to why were the quiet when their co-star Brie Larson who played 'Captain Marvel' was being bullied for several months by trolls. Chris Pratt Gets Massive Support From Robert Downey Jr, Mark Ruffalo, James Gunn Against Bizarre Online Hate For Him.

The Captain Marvel star was at the receiving end of harsh and sexist comments for months together for speaking up against issues. Not just her but Marvel's other female cast Zendaya and Tessa Thompson were also targeted. However, none of them had voiced their opinion then and are now taking public stand for Pratt, is what bothering the fans. Check out the tweets below.

I was actually shocked to see MCU’s biggest cast crawl out from their caves only to defend Chris Pratt. I’m also shocked because i don’t remember seeing them doing the same thing for Brie Larson when the hate that was going towards her was much more bigger and worse...

On Outpour of Support

bruh where was all this outpour of support for brie larson when she was being relentlessly attacked by men online for existing and standing up for marginalized groups ?? can’t believe the mcu cast could stand by for that but the second chris pratt gets called ugly it’s over lmao

Brie Larson, Zendaya and Anthony Mackie faced months of hateful attacks, yet most of you in the cast were silent as hell. But when Chris Pratt loses a silly Twitter poll, y’all lose your damn minds. https://t.co/jKhAq5u1HI

zendaya and brie larson seeing all the marvel actors who were silent about the racism and misogyny they faced rush to defend chris pratt because the internet said he wasn't that hot pic.twitter.com/BasUrsItkH

Earlier, Chris's wife Katherine Schwarzenegger Pratt also slammed the trolls for online hate against her husband. She wrote on one of the posts, "Is this really what we need? There’s so much going on in the world and people are struggling in so many ways. Being mean is so yesterday. There’s enough room to love all these guys. Love is what we all need not meanness and bullying. Let’s try that."

(The above story first appeared on LatestLY on Oct 21, 2020 12:35 PM IST. For more news and updates on politics, world, sports, entertainment and lifestyle, log on to our website latestly.com).