Avengers: Endgame - Memes on Ant-Man Entering Thanos’ Butt to Kill Him Take Over the Internet

Am I the only one who is asking for a refund if Ant-Man kills Thanos with Thanus theory? 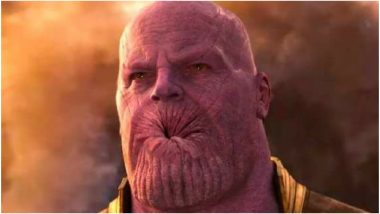 With Avengers: Endgame just around the corner, the fan theories around the movie are wilding. Have you heard one theory called 'Thanus'? So, this one suggests that the best person to kill Thanos, the Mad Titan who snapped away half of the living creatures in Infinity War, would be Ant-Man. Not Thor. Not Captain America. Not Hulk. Not Iron Man. Not Captain Marvel even. But Ant-Man. The plan requires Ant-Man to shrink down to a small size and then enter Thanos' rectum. Yes. Reading it again won't change it. And after entering intergalactic villain's purple bottom, Ant-Man should switch to his maximum size, as he did during the airport fight in Captain America: Civil War. Or just destroy him from the inside. After Making the Highest Pre-Sales Record in 24 Hours, Avengers: Endgame Tickets Are Being Sold on eBay for Over $2000.

Now this theory and its popularity are what the internet was invented for. Forget the idea of globalisation and bringing the worlds closer than ever before, Ant-Man going Thanus is where the internet is at right now. Ahead of Avengers: Endgame's Big Worldwide Release, Co-Director Joe Russo Explains Why Superhero Mythology Works.

The wildly popular theory also generated several memes. Because, why not. So, here's presenting the best memes on the Thanus theory.

The low angle shot is killing it

ant-man going up thanos’ ass to grow inside him pic.twitter.com/l0FD8VDjT0

Someone went the extra mile to make this edit

Am I the only one who is asking for a refund if this happens?

Thanos when Ant-Man dives inside his ass. pic.twitter.com/mcxeqB1mzq

The ending that many want. But is the ending we deserve? Sorry for going all DC in a Marvel world

thanos when small ant man crawls up his ass pic.twitter.com/B7gO2mRvvC

Can we please not bring food to this fight?

What would Stan Lee say?

Fine. This one is the only one that makes any sense

Poetry at its best.

green is the grass

That is NOT the build-up we were looking for.

If Ant-Man doesn't crawl up Thanos' ass and explode out like the Kool-Aid Man what even was the point of the past 11 years of #MCU ?

BTW, Joe Russo, the one half of the director duo of Avengers: Endgame, was in India. He was asked about the theory by a few journalists asked him what he thinks about the gross theory. "We like engaging with the fans and find the same humour in it that they do. We were fanboys before we became Marvel directors," he said.

(The above story first appeared on LatestLY on Apr 04, 2019 06:28 PM IST. For more news and updates on politics, world, sports, entertainment and lifestyle, log on to our website latestly.com).