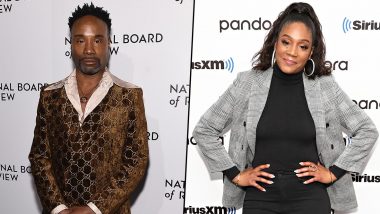 Actor Billy Porter left actress Tiffany Haddish horrified, when he ate using his hands, even though she knew they were clean. "It was the end of the evening, that pot roast was fierce -- you know that kind of food that makes you want to throw your shoe at somebody? That," Porter said on "Late Night With Seth Meyers", reports femalefirst.co.uk. He added: "I had washed my hands, and she saw me do it! She's a little germaphobe, so she made me take the potlicker home." Critics’ Choice Awards 2020: Zendaya, Billy Porter, Jennifer Lopez and Other Hollywood Stars Make Fashionable Entries on The Red Carpet (View Pics)

"The Intern" actor had shared that Haddish took him on a night out to the strip joint Swinging Richards in Atlanta while filming "Like a Boss". He recalled there are "no limits" in the place. Porter shared that everyone screamed upon Haddish's entrance to the raunchy nightclub. "She's a comedian, and she's been on the road with a lot of comedians -- aka, male comedians. So when you walk into a strip club with Tiffany, you're at the strip club with the strip club people." Billy Porter Opens Up on His Struggles in ‘Homophobic’ Music Industry.

"Now I've had my share of strip clubs, but you walk in with Tiffany and it's like (yelling) 'Tiffany Haddish is in the building!' This is one of those strip clubs where you can see all the skin. There's no limits. It was fun," he said.

(The above story first appeared on LatestLY on Jan 18, 2020 12:04 PM IST. For more news and updates on politics, world, sports, entertainment and lifestyle, log on to our website latestly.com).