Black Widow has finally released in some parts of the world and the reviews are already in. Some of the critics are calling it a better female superhero film than Captain Marvel, while others are happy that MCU has made some tweaks to its storytelling template. 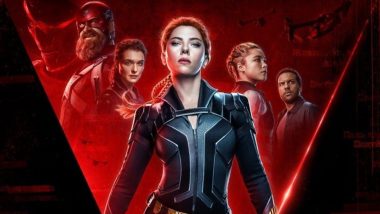 Black Widow finally releases in some parts of the world after playing the waiting game like several other movies owing to the pandemic. However, in India, the film will only hit the theatres and for that, the wait continues. The reviews for the Scarlett Johansson, Florence Pugh, Rachel Weisz, and David Harbour movie are already in. The critics can't stop gushing over the stand-a-alone feature on Black Widow, the glue that had kept all the avengers together. Scarlett Johansson Opens Up About Her Black Widow Role, Says ‘I Feel Really Proud of This Film’

Check out the reviews here...

IGN India: While Black Widow eulogizes Natasha Romanoff as a formidable, tough-as-hell hero with the clearest heart, it also intensifies Endgame’s poor handling of her send-off, and the unbalanced level of respect given her male peers. Think of it this way: Iron Man’s sacrifice was honored with a big memorial. Captain America retired and even reunited with Peggy Carter before returning home, an old man. Natasha Romanoff endured years of abuse, and risked life and limb after escaping, before sacrificing herself for a friend. She still deserves a real memorial.

Variety: But it’s Scarlett Johansson who holds the film together and gives it its touch of soul. Natasha’s desire for vengeance is pulsating, but so are her inner wounds, and Johansson, unusual for the comic-book genre, makes the most vulnerable emotions part of the humanity of her strength. She’s a flame-haired dynamo who needs to slay her former mentor to defeat her own damage. When she finally faces off against Dreykov, played by Ray Winstone as a bureaucrat hooligan, seething under his horn-rims, it’s a duel of wits and will. Black Widow: From ‘Ivan’ to ‘Budapest’, 5 Pertinent Questions We Want Answers From Scarlett Johansson’s Marvel Movie

BBC: Maybe it's no surprise that the film is entertaining and full of action. It is unexpected, though, that Black Widow may be the least Avenger-like movie in the series so far. No offence to the other Avengers, but after all this time a tweak in the formula is a good thing. Black Widow sets itself apart by emphasising Natasha's past, and her reunion with her fractured, drolly comic family. Not a peep out of those other superheroes.

(The above story first appeared on LatestLY on Jun 30, 2021 09:55 AM IST. For more news and updates on politics, world, sports, entertainment and lifestyle, log on to our website latestly.com).