Chris Evans Reacts to His Photo Leak Incident, Says 'It’s Embarrassing, But You Gotta Roll With The Punches' 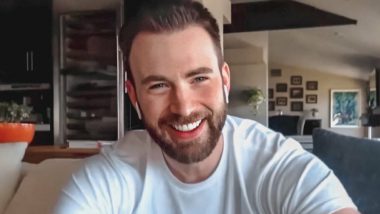 Chris Evans recently hit the headlines for his accidental nude photo leak. While the actor came with an amazingly clever comeback for the same on social media, in a recent interview for the Tamron Hall Show, the actor spoke about the incident for the first time and even called it 'embarrassing'. One of the greatest things that happened after Evans' photo leak was that his fans came in support of him and to respect his privacy, flooded social media with other cute pictures of him. The actor in his recent response also spoke about the Evans Army and how thankful he is for them. Chris Evans Has the Cleverest Comeback to His Accidental Nude Photo Leak On Social Media (View Tweet).

The conversation on the Tamron Hall show started with Chris joking, “Something happened this weekend?” He later reacted to the incident and said, "It was an interesting weekend full of lessons learned, a lot of teachable moments. Things happen. It’s embarrassing, but you gotta roll with the punches. I will say, I have pretty fantastic fans who came to my support.”Scott Evans Has a Hilarious Response to Brother Chris Evans' Nude Photo Leak (View Tweet).

Prior to this Evans had taken to social media and decided to use all the 'attention' he had received from fans after the photo leak to ask them to vote. He wrote, "Now that I have your attention?. VOTE Nov 3rd!!!"

For the uninitiated, last weekend, the Captain America star took social media by storm after he accidentally posted an explicit photo on his social media page and immediately deleted it after realising it. Though given the times we live in, it quickly went viral and had Evans trending on top on Twitter within minutes of the leak.

(The above story first appeared on LatestLY on Sep 16, 2020 11:44 AM IST. For more news and updates on politics, world, sports, entertainment and lifestyle, log on to our website latestly.com).