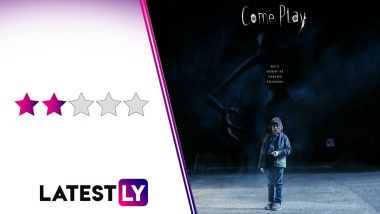 Come Play Movie Review: Remember The Babadook? The acclaimed Australian horror film that came out in 2014 feels like a major inspiration for this week's horror film, Come Play, written and directed by Jacob Chase. If The Babadook became a scary embodiment of grief, then the ghoul in Come Play is obsessed with loneliness. Even if it has an everyday name as Larry. Maybe all the Larrys in the world needs a hug. Come Play: Steven Spielberg’s Horror Movie Probes Link Between Technology and Loneliness.

So Larry is the boogeyman who haunts little Oliver (Azhy Robertson), beginning with his iPad. Oliver has autism and is non-verbal (not mute, he just uses his mobile to communicate words). His parents, Sarah (Community's Gillian Jacobs) and Marty (The Newsroom's John Gallagher Jr) are estranged, with Marty moving out of the house in the beginning of the movie. Oliver is also being bullied at school by his mates. It's then Larry begins to haunt Oliver through an app called Misunderstood Monsters.

So how is Larry? Well, he did have an imposing aura about him when he remained in the shadows. But when he comes out of the darkness, he feels more like if that alien from Signs had a child with ET, and that offspring was so ashamed with his name that he went on to live in another dimension. Also, for some reason, he can only be seen through iPads and loves to play with bulbs (at one point, even fixing the ones he broke so that he can play with them again). In case, you wonder why Larry chose Oliver out of all the lonely people in the world, well, the movie won't have any answers for that.

I don't know if I would have loved Come Play better if I hadn't watched The Babadook before (along with the rest of horror-loving world). At least, the kid in this film is much bearable than the one in The Babadook. Azhy Robertson of the Marriage Story fame has an innocuous appeal about him and he is also quite a good performer, often becoming the only reason to watch the film. Otherwise Come Play has nothing new to offer, neither story or scare wise. Which makes it the third disappointing horror film I watched this week, after Peninsula (just not Train to Busan) and Mane Number 13 (terrible). The post-Halloween period doesn't look so good now! (that said, check out Andhaghaaram on Netflix, that feels the king of the heap now).

Anyway, returning to Come Play, the Larry in the film gets nearly an hour in the film to get going. Till then, the movie seems to be wanting a commentary on loneliness and kids' need for parental attention. Don't worry if you miss out on this messaging. In the end, 'Larry' tells Sarah that we as a civilization are now facing screens more than each other. Very subtle, I must say! Steven Spielberg’s Horror Movie ‘Come Play’ Heads for November 27 Release Date in India.

There are a couple of good moments, though. Larry gatecrashing Oliver and his schoolmates is kinda spooky, giving us the first real glimpse of the ghoul. Another standout scene was when Oliver plays with his father's laser device at the latter's workplace and Larry manifests there too. Also the final scene brings a touch of sentimentality, suddenly making us remember that we are watching a film that is produced by Steven Spielberg. But apart from these scenes, the rest of Come Play remains the dull affair, as the scares come with a lot of buildup and therefore become predictable.

In the end, Come Play may want to show the evils of giving more importance to the screens. But we cannot ignore the double standards here, when we do the same while watching this film on Netflix or Amazon Prime, whenever it has an OTT release. And that's a major sin!

- A Couple of Spooky Moments

Come Play is no Poltergeist (the best horror film from Steven Spielberg's production house), as it lacks a fresh storyline and good scares. Watch it if you run out your wishlist of scary movies and then wonder if Larry coming out your screen is scarier or the idea of Mark Zuckerberg possibly stealing your data through the Facebook app.

(The above story first appeared on LatestLY on Nov 26, 2020 11:43 PM IST. For more news and updates on politics, world, sports, entertainment and lifestyle, log on to our website latestly.com).